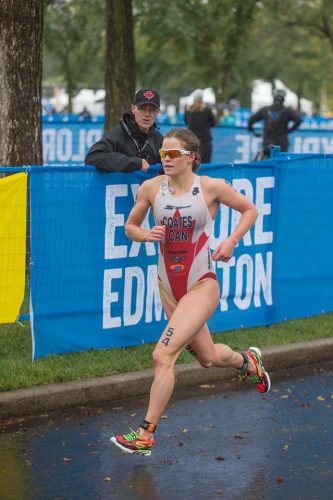 Whether as a triathlon competitor or a U of G graduate student, elite athlete Alexandra Coates has been studying the effects of intensive training on athletic performance.

Coates is the subject of a Triathlete.com feature that tells her own training story and how her PhD work in the field of exercise physiology is shedding light on the ill effects of too much training. She was familiar with the subject from personal experience.

Too much training and not enough recovery can have long-term negative impacts, she told the magazine.

“I saw athletes who have experienced overtraining syndrome and were still dealing with the consequences of it many years later,” she said in the story. “It not only ended their triathlon careers, but has also impacted their ability to perform normal, healthy physical activity as a retired athlete.”

A 2018 study based on the findings of Coates’s research in the Department of Human Health and Nutritional Sciences was highlighted last year in U of G News. Measurements of stress in the body showed that more isn’t better when it comes to endurance sport training.

According to the study, overload training may alter firing in the body’s sympathetic nerve fibres, which could hinder performance.

“The theory behind overload training is that you train to the point of complete exhaustion, so that when you rest and recover, you will be able to perform at a higher level than before,” Coates said.

It appears that a consistent training regimen without overload stress may be more conducive to performance improvements.