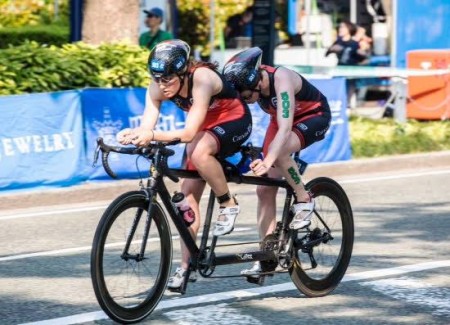 Sasha Boulton and Christine Robbins spend a lot of their time tethered together, literally.

Boulton, a 22-year-old biomedical engineering student at the University of Guelph, and Robbins, a legally blind athlete from Abbotsford, B.C., will travel to Rio next month to represent Canada in the first-ever Paralympic Games triathlon.

With Boulton acting as guide, the women will be physically connected during the swimming and running phases of the race.

Since they met in February 2015, the bond between them has grown well beyond a length of material secured around their waists.

“It’s a team sport,” says Boulton, a Gryphon swimmer and triathlete for the past 12 years. “We compete side by side and we finish together. We’re very close — it evolved pretty quickly. You have every meal together, every workout together and you travel together.”

“We worked well together right away,” says Robbins, 38. “In our first year as a team, we compromised a lot. By the second year, we would be able to talk about things openly and be much more upfront with each other.”

That transparency and trust, coupled with the implementation of some innovative race techniques, have led to success and qualification for Rio, which will be Robbins’ last competitive triathlon.

Boulton is more laid back than Robbins, but the guide knows when to push her partner. They have meshed as competitors and become like family members away from the triathlon course.

They were brought together by chance.

Boulton, originally from Oakville, Ont., was training on her bike in California in February 2014 when she suffered a bulging disk in her back. She took 13 months to recover physically. But it wasn’t just her body that needed repairing.

“It was the hardest time I’ve ever had mentally,” she says. “It was painful to walk. You go from training 16 hours a week to none. It felt like I was being forced out of the sport rather than leave on my own terms.”

She says she was fortunate to have a network of helpers, including her family, coach and U of G teammates.

Gryphons swim coach Don Burton pushed Boulton to get into the pool. She competed on the varsity team during her first two years at U of G but hasn’t raced for the last two seasons despite appearing on the roster. Boulton’s parents, Tami and Keith, and younger brother, Jacob, also provided support during the recovery process.

In fall 2014, Boulton got a call from triathlon coach Michel Elibani. He wanted to know whether she wanted to become a guide for an athlete trying to qualify for the Rio Paralympics.

The following April, Boulton went to Ottawa to train with her new partner. She spent 10 days learning to ride the tandem bike, and swimming and running with the tether for the shortened version of a triathlon (750-metre swim, 20-kilometre bike and five-kilometre run).

They raced together for the first time less than two weeks later, placing third at an event in Monterrey, Mexico.

“It was a totally new world to me,” says Boulton. “There was definitely some trial and error. We almost ran into a few things on the road. But I was totally hooked.”

Although they have had the odd setback during events, Boulton and Robbins form a solid team. Both can adapt and troubleshoot, such as the time last year when they used duct tape and twist ties to secure a wobbly bicycle seat during a race in Guelph.

They always aim to track down as many competitors in front of them as they can. Boulton has helped them shave critical seconds from their times by implementing some common triathlon strategies. Elastic bands help secure their shoes to the bike pedals for a smoother transition to the run, and they also make tighter cycling turns, techniques since adopted by other teams.

They earned a discretionary spot for Rio after finishing eighth at the world championships in Chicago last year. Confirmation came July 8.

“We were on a bike ride, training,” says Boulton. “We had Christine’s phone on loud and a Canadian coach called. She said we qualified for Rio, and we started dancing in the street.”

They leave for the Paralympic Games Sept. 2 and race on Sept. 11; they hope to place within the top eight finishers.

Both will stay in the athletes’ village. They plan to remain in Rio for sightseeing until mid-September.

After that, their competitive partnership will end. Robbins, a research and policy analyst for the Canadian National Institute for the Blind, will move back to Abbotsford and retire from triathlon competition. Boulton is contemplating going to grad school or finding a job.

Although their days as a triathlon duo are nearing an end, the bond they have forged to get to Rio can’t be broken — even if the tether is gone.

“I’ve already decided that Sasha is coming to our cottage next year,” says Robbins. “She can’t get rid of me that easy. We’re sisters now.”