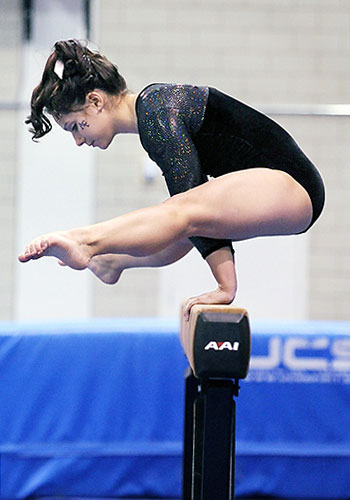 Elite female athletes who participate in sports where body type is judged, such as gymnasts, face specific training challenges.

The Female Athlete Health Project is an educational tool for coaches and athletes to help protect female athletes’ health and improve their performance, says Dr. Margo Mountjoy, a sport medicine physician at U of G’s Health and Performance Centre. As a member of the IOC Games Group, she works at both Summer and Winter Olympic Games; between the Olympics she works on special projects, including the Female Athlete Health Project, which she chairs.

The project addresses 12 areas of interest for female athletes, such as maintaining bone, hormonal and mental health, injury prevention, nutrition, eating disorders and the effects of exercise on pregnancy.

Mountjoy explains that all athletes, regardless of gender, need to consume extra calories to support their bodies’ daily needs and the demands of their athletic training. If their caloric intake falls short, it can affect multiple body systems and impair performance. She admits that it’s difficult for elite athletes to reduce their training, so she recommends increasing their calorie consumption by eating more frequently and eating more calorie-dense foods.

Some female athletes are more susceptible to developing eating disorders, she adds, such as those who compete in sports where body type is judged, such as gymnastics or synchronized swimming. “This project provides coaching recommendations to eliminate negative comments about body image,” says Mountjoy. The project also offers tips for coaches if they suspect an athlete may have an eating disorder, including approaching the athlete or asking for a referral to a family or sport medicine physician.

Aside from physical fitness, mental health also plays an important role in athletic performance, says Mountjoy. “The mental game is a big part of performance. I’ve seen many athletes at the Olympic Games who are in top shape and should be medalling lose a medal because their brain game was not on.” Training an athlete’s brain is just as important as training his or her body. Every athlete has their own way of coping with mental stress prior to a competition, she says, such as using mental imagery, positive self-talk or engaging in familiar habits, such as listening to music to block out external distractions.

The project includes a video featuring interviews with Mountjoy; and Craig Taylor, coach of the Guelph Regional Triathlon Centre. The video will be featured at the Youth Olympic Games, the 2016 Summer Games in Rio de Janeiro, Brazil, and online at olympic.org.

Mountjoy says the project will help translate sport medicine research for coaches and athletes in 208 countries. A former synchronized swimmer, she has worked as a family and sport medicine physician for the past 25 years. “Sports is in my blood,” she says. “I like helping people achieve their optimal physical best.”