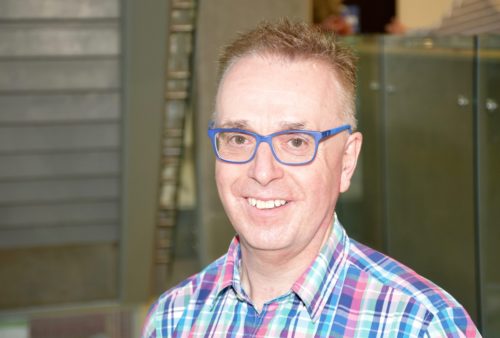 Coming out as a gay person can be a difficult process, says Prof. Andrew Peregrine

Deep-seated and justifiable fears kept Andrew Peregrine from revealing who he really was. When he finally was able to come out as gay about seven years ago at age 50, his emotions were overwhelming.

Now, the Ontario Veterinary College professor, comfortable with his identity and with making it public, is helping to foster a University of Guelph campus community more supportive of LGBTQ+ people – one that makes it easier for them to be themselves.

He helped establish a Pride VMC (Veterinary Medicine Community) club on campus whose members will participate in this year’s Toronto Pride Parade on Sunday, June 23.

Coming out, Peregrine said, is never an easy thing to do. He mistakenly thought it would be an overnight process, but it was far from it.

“For most folks, it is like getting on this train that never stops,” he said.

Peregrine grew up in the United Kingdom, went to veterinary school in Scotland and completed a PhD in east Africa. A clinical parasitologist, he studies parasitic infections in animals.

He grew up at a time when male homosexual acts were still criminalized under the law in Britain. He was an active church member in both England and Kenya, where he lived and worked for a dozen years. In Kenya, sex acts between male persons of any age have long been against the law and punishable by imprisonment. Homosexuality remains outlawed in that country.

“While it was illegal in the U.K., it was positively dangerous in Kenya at that time,” he said. “In hindsight, maybe I was questioning, but I never really gave it any thought because it really was dangerous.”

Peregrine suppressed his feelings, avoided relationships and did not even admit to himself he was gay, let alone to anyone else. He came to Guelph in 1997 and for the first time began meeting people in the LGBTQ+ community, where he felt most comfortable.

In time, he began questioning his sexual identity, but as that process unfolded he experienced recurring bouts of depression accompanied by suicidal thoughts, which he first attributed to working too hard.

“I had a friend who was gay and I was able to talk with him about my questioning,” he said. “But it just took me ages, at least two years, to come out to him. I had no idea at the time what coming out was going to be like.”

The effects were frightening.

“That first night, I woke up at about three in the morning with the most monumental panic attack,” he recalled. “It was like a bomb had gone off. I woke up shivering and sweating. That happened every night for at least the next five nights. I had no idea what was going on.”

He considers those attacks to be expressions of deep subconscious fears.

Coming out and being public about it was important to him and he took steps to overcome his fear and press on – not only for his own well-being but also to help others going through a similar challenge.

Watching a series of videos called It Gets Better – personal stories of those who have come out – helped. A rant by Canadian comedian, television personality and author Rick Mercer about the suicide of a 15-year-old gay boy was particularly poignant, he said. 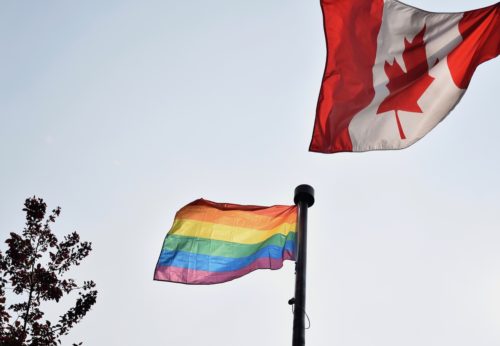 “That made me realize that I had to be visible at work.”

The Pride VMC club, Peregrine said, is vitally important because its members support and encourage each other. The club, formed about seven years ago for veterinary students, is especially supportive for those struggling with coming out. Recently, organizers have worked to open the club to the broader U of G community.

Jarred Sanchez-Cacnio, sexual and gender diversity adviser at U of G, said the club serves a vital role on campus. Having a faculty member dedicated to its success is important, said Sanchez-Cacnio.

“Additionally, having a specific community and space within the veterinary college gives a lot of students the opportunity to feel validated, bring their authenticity to their studies and future profession.”

Sanchez-Cacnio added that a club based in a professional college helps alleviate any stigma that can still attend being openly out. Another LGBTQ+ group exists in the School of Engineering.

Pride VMC’s biggest event in the calendar is the Toronto Pride Parade. The group invites the entire LGBTQ+ campus community to take part.

“There is strength in being a part of community,” Peregrine said. “And since coming out is not an overnight event, being able to interact socially with people in your own community is really important.”

“I can be who I am, rather than having to hide it,” he said. “For 50-plus years, I never was prepared to acknowledge who I was. Now I am.”