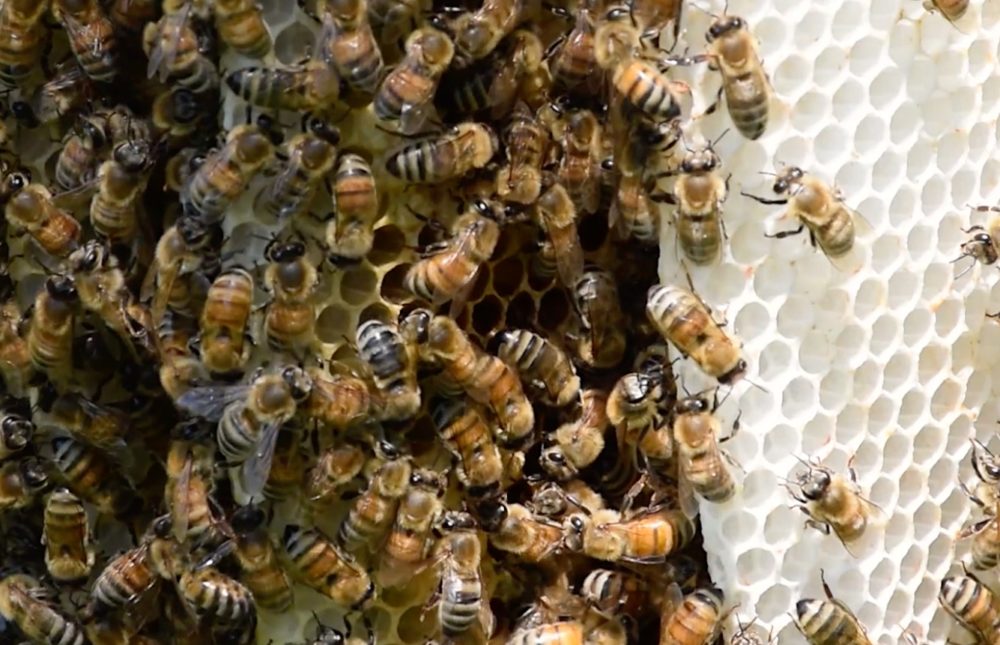 A University of Guelph study is the first to uncover the impact of neonicotinoid pesticides on honeybees’ ability to groom and rid themselves of deadly mites.

The research comes as Health Canada places new limits on the use of three key neonicotinoids while it decides whether to impose a full phase-out of the chemicals.

Published in the Nature journal Scientific Reports, the study revealed that when honeybees are infected with varroa mites and then regularly exposed to low doses of a commonly used neonicotinoid called clothianidin, their self-grooming behaviour drops off.

Without that self-grooming, bees are susceptible to mites that can also carry viruses that can quickly kill, said lead author Nuria Morfin Ramirez, who completed the research along with Prof. Ernesto Guzman, School of Environmental Sciences, as part of her PhD.

“When bee colonies began to collapse years ago, it became clear there wasn’t just one factor involved, so we were interested in whether there was an interaction between two of the main stressors that affect bees: varroa mites and a neurotoxic insecticide, clothianidin,” said Morfin.

“This is the first study to evaluate the impact on the grooming behaviour of bees.”

Neonicotinoids, or “neonics,” are the most commonly used insecticides in Canada. They are coated on canola and corn seeds or sprayed on fruit and vegetable plants and trees. But they have also been linked to honeybee colony collapses.

Varroa mites are also contributing to colony collapses and have been associated with more than 85 per cent of colony losses. The mites kill bees by slowly feeding off their body fat and hemolymph (blood), and can also transmit a virus called deformed wing virus (DWV). One of the only ways bees can protect themselves is to groom aggressively and brush the mites off.

The researchers wanted to know whether the two stressors of pesticide exposure and varroa mites were working together to contribute to bee deaths.

The research team used bees from U of G’s Honey Bee Research Centre and exposed them to a widely used neonic clothianidin, either on its own or along with varroa mites. They experimented with three doses of clothianidin, all similar to what the bees would experience while feeding on flower nectar of neonic-treated crop fields, but all low enough to be considered sublethal.

“What we found was a complicated interaction between the mite and the pesticide that decreased the proportion of bees that groomed intensively, and affected genes associated with neurodegenerative processes,” Morfin said.

Bees exposed to medium level doses of the neonic showed no changes in grooming behaviour, but when they were also introduced to varroa mites, the proportion of bees that groomed intensively was 1.4 times lower compared to the bees exposed to clothianidin alone.

When exposed to the lowest dose of the pesticide, the proportion of bees that groomed significantly dropped. The lowest dose was also linked to an increased level of deformed wing virus — an effect not seen at the higher doses.

“These results showed a complex and non-additive interaction between these two stressors,” said Guzman. “This study highlights the importance of reducing stressors that bees are exposed to, to reduce the risk of disease and consequently colony mortality.”