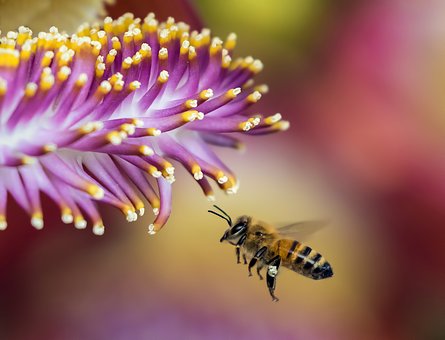 A gene linked to grooming could be the key to saving honeybees from the deadly varroa mite, according to new University of Guelph research.

Prof. Ernesto Guzman discovered that honeybees with higher expression of a gene linked to vigorous scratching are better at removing mites from their bodies, and more resistant to the bugs, than bees with lower gene expression.

“Mites exist in about 85 per cent of honeybee colonies, so it’s near impossible to eradicate them,” said Guzman, who led the study with scientists from Purdue University. “Instead, the goal is to keep the population low. One way to do that is to breed bees that are resistant to them, and one mechanism of resistance is their grooming behaviour.”

Published recently in Behaviour Genetics, the study found that bees responding to mites with aggressive body scratching had higher expression of the gene Neurexin-1, known to be associated with repetitive movement.

Varroa mites cling to a bee’s body and feed off its blood. Infected bees live half as long as normal bees and usually die from blood loss or from transmission of a deadly virus from the mite.

All bees have the grooming gene, but strains with higher gene expression are more aggressive scratchers, said Guzman, a professor in the School of Environmental Sciences.

“There are some bees that don’t scratch and others that scratch lightly and then give up,” he said.

Mites are flat and tuck themselves between segments on the bees’ abdomen, making them hard to reach. To eliminate them, bees need to scratch vigorously with two or three legs and shake their bodies for an extended period of time, he said. “Only 15 to 20 per cent of honeybees are able to remove the mites by scratching.”

In order to link the gene with mite resistance in bees, Guzman had to show intense scratching lends resistance in some honeybee strains.

In a previous study, he and other researchers found far more intensive grooming behaviour in Russian bees, known to resist mites, than in non-resistant Ontario bees.

“Russian bees were among the first strains of bees to be exposed to the mites and have built up a resistance, but we wanted to determine what was providing that resistance,” said Guzman.

To determine whether intense grooming was linked to genetics, the new study’s team compared RNA of bees after introducing mites. Intensely grooming bees showed high expression of the Neurexin-1 gene.