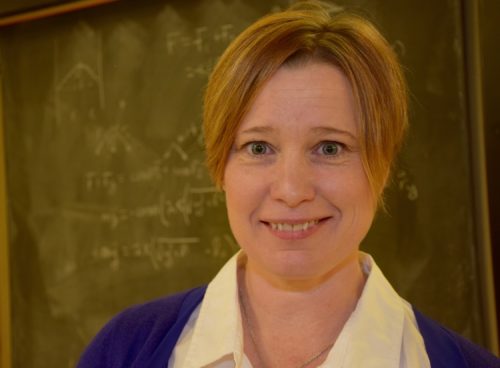 From Smarties to improv, an unconventional toolkit for engaging students in the classroom has helped earn recognition for University of Guelph physics professor Joanne O’Meara as one of this year’s 3M National Teaching Fellows.

This recognition is featured in Macleans.

O’Meara, a 17-year classroom veteran at U of G whose teaching has already earned a number of honours, was named today as one of 10 3M award winners.

The annual awards are sponsored by 3M Canada and the Society for Teaching and Learning in Higher Education. O’Meara is the 17th University of Guelph faculty member to receive the award since it was created in 1986.

“It’s amazing to think that what I’ve been doing here is recognized as outstanding on the national level,” said O’Meara, who serves as the department’s associate chair.

“Teaching is a really great profession. It’s so rewarding to work with students who want to learn.”

Referring to O’Meara’s passion and ability to make her subject accessible, the Maclean’s citation said: “Her pioneering work in using active-learning techniques in her classes and her willingness to explore and share new teaching ideas have revolutionized the teaching of physics at Guelph and across Canada.”

Charlotte Yates, provost and vice-president (academic), said, “This well-deserved recognition is wonderful news for Professor O’Meara and her department. Dr. O’Meara exemplifies the commitment to leadership and teaching excellence that is the bedrock on which our reputation as a student-centred, top comprehensive University has been built.”

For her introductory classes taught to non-physics students, O’Meara has developed ways to engage students who often arrive either terrified or ambivalent about the subject.

Working out sample problems in the classroom, she regularly uses clickers and asks questions to test student understanding.

She offers a box of Smarties for any student who catches her out in a mistake – even deliberately erring at times. “It really encourages a lot of them to pay close attention. It changes the dynamic when they understand that I really do want them to engage with the material.”

Her “office hours” are more like tutorial sessions. Twice a week for two hours at a time, she circulates around a room, working with up to 30 students preparing for regular quizzes.

“Being able to communicate with non-physicists is a really important skill regardless of what direction you take,” said O’Meara, who gives not conventional classroom participation marks but “engagement marks.”

“There are ways to demonstrate engagement in the course apart from putting up your hand.”

She recalls one student who had initially been terrified about speaking in her science communication class. The student ended up working for a summer at Joshua Tree National Park in California, where she led nighttime astronomy sessions for 200 visitors at a time.

“She told me that she wouldn’t even have applied for the job before taking our science communication course,” said O’Meara.

As her department’s associate chair and chair of its curriculum committee, O’Meara helped lead an overhaul of undergraduate programs, including introducing courses in mathematical physics and computational physics.

Among her earlier classroom honours, she received U of G’s Presidential Distinguished Professor Award and the John Bell Award, named for a former languages and literatures professor who was U of G’s first-ever 3M award winner in 1986.

She co-authored an undergraduate physics textbook along with emeritus professor Ernie McFarland – who won a 3M award in 1987 — and Al Hirsch, a retired high school teacher.

Said McFarland, who wrote a nomination letter for O’Meara, “I am absolutely delighted that Joanne is receiving a 3M National Teaching Fellowship. Not only is she an outstanding classroom teacher, but she had also had extensive involvement in improving physics teaching and curriculum in Canada.”

O’Meara completed the Banff science communications program co-taught in 2015 by Jay Ingram, former co-host of Daily Planet on the Discovery Channel and host of CBC’s Quirks and Quarks. She has led Physics “Phun” shows for groups from preschoolers to high school students and has appeared on segments of Daily Planet.

Originally from Toronto, O’Meara completed her PhD in medical physics at McMaster University. Her first teaching job that year was a semester spent at a community college in Bermuda – a “trial by fire” experience that she said instilled her commitment to student engagement.

After a post-doc at Massachusetts Institute of Technology and a year spent teaching at McMaster, she came to U of G in 2002.