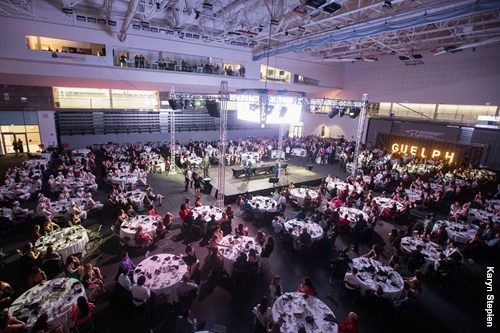 After a long season of sweat, pain and both heartbreak and elation, the University of Guelph’s athletes dressed up to receive well-deserved recognition for their efforts. A crowd of more than 800 descended on the Guelph Gryphons Athletics Centre for the annual Gryphons Athletic Banquet, with every varsity team represented.

In a year in which the storied Gryphon track and field program had its best season ever, it was only appropriate that two OUA and U Sports champions were recognized as Female and Male Athletes of the Year. Fourth-year hurdler Sarah Hammond won the women’s award, while fifth-year middle distance star Tommy Land was named the men’s winner for the second year in a row.

Congratulations to this year’s award winners:

Read more about this year’s winners and banquet highlights.