Editor’s Note: This article originally appeared in The Conversation Canada. It also ran in the National Post.

The rhetoric surrounding the ongoing renegotiation of the North American free trade agreement (NAFTA) is fomenting fear that the pact rests on shaky ground and its demise is a real possibility.

Don’t believe the bluster. As a longtime researcher of food and agriculture policy in both the United States and Canada, I don’t believe NAFTA is about to disintegrate.

Even though U.S. President Donald Trump has loudly signalled a willingness to pull the plug and pull out of NAFTA — and despite the negativity often expressed in recent commentary on the subject — the dissolution of the agreement is highly improbable.

Most understand that killing the trade agreement among Canada, the United States and Mexico would be catastrophic.

The negotiations may be tense, but NAFTA’s termination is an unrealistic possibility for a number of reasons. Primary among them is the fact that it has generally been a very good deal for all three economies. 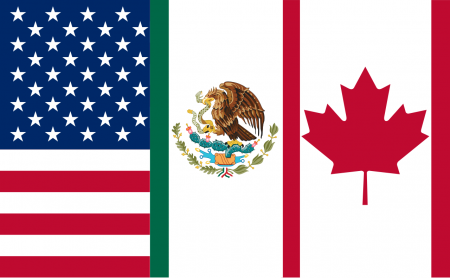 By lowering or eliminating tariffs on most trade goods, NAFTA increased by three times the trade among the three countries. It has spurred foreign direct investment, created jobs and kept inflation in check. It has especially served the Canadian agriculture and food sector well, even though some details of the agreement could definitely be changed to bring it up to date.

The consequences of ending NAFTA outright would be calamitous. If the economic integration that has evolved over the past two-plus decades were to be lost, it would throw several sectors — many industries, businesses and communities — into turmoil.

Renegotiating these types of international trade agreements is not necessarily a bad idea. A number of conditions have changed in the marketplace since NAFTA was enacted in 1994.

Production processes have transformed, and products and services that didn’t exist back then now have a significant presence in the marketplace.

Renegotiation is an opportunity to incorporate those changes into the general framework of the deal. A modernized agreement would be beneficial for all three countries.

One of the successes of NAFTA is the extensive integration of the markets it has fostered. Certain products can now cross borders multiple times before they reach end use. And increased efficiencies have been incorporated into production processes on all sides of the border.

Dismantling that integration would prove disastrous – in agriculture for sure, but also in Canada’s manufacturing sector, which is highly dependent on that integrative fluidity.

NAFTA certainly has shortcomings. There have been losing sectors. Communities, particularly in the United States, that were especially reliant on automotive, electronics and apparel sectors saw some of their production and jobs move to Mexico.

Perhaps not enough has been done to help those in hard-hit communities make a transition into new jobs and business opportunities. Because of that, there is NAFTA resentment in some areas.

But Canadian agriculture has benefited greatly from NAFTA. There has been some criticism in the United States of Canada’s supply management system for agricultural products like milk, chicken and eggs. Some of that criticism has gone so far as to call for abolishing supply management.

That view is almost entirely steeped in rhetoric, and the elimination of those Canadian protective measures is also highly unlikely. There’s also strong public and financial support for production agriculture in the U.S. as well.

If the demise of NAFTA were imminent, we would surely see its death foreshadowed in the risk-management behaviour of agricultural producers and in the manufacturing sector. But there are no signs of the stockpiling of goods in preparation for severed supply lines. And there are no “for sale” signs on the poultry or dairy farms in the countryside.

What we’re hearing during this renegotiation period is a lot of political noise. But we should also expect very little in the way of major change to NAFTA.

There has been a lot of bluster surrounding the ongoing negotiations. But the chances of a catastrophe are minimal.