It once dominated the forests of eastern North America, but the American chestnut was nearly wiped out during the past century by a devastating fungal disease. Now a new survey by University of Guelph researchers offers a bit of hope for the survival – and perhaps the ultimate recovery — of this native tree in southwestern Ontario.

In results published this summer in the journal Forest Ecology and Management, the U of G team reported finding more individual specimens of American chestnut in the province than expected.

The bad news: Failure of those survivors to reproduce rapidly enough means the officially endangered species remains effectively “frozen in time” and will continue to decline without adequate replanting and other conservation measures.

The new paper is based on the results of a 2014-15 survey of American chestnut trees across southwestern Ontario. The most recent survey since an inaugural snapshot 13 years earlier, the report recommends steps for preserving the species and perhaps reviving a stable population in the province.

“There are not many ecological disasters as significant as the loss of American chestnut in North America,” says integrative biology professor Brian Husband.

Until the early 1900s, American chestnut was a dominant canopy tree in deciduous forest stands that historically blanketed much of the eastern part of the continent. Besides its ecosystem role in those forests, the species was valued for its rot-resistant timber and as a food source for humans and wildlife.

An estimated two million trees once grew in southern Ontario, the northernmost limit of its range, says Husband.

Today less than one per cent of that total remains in the province’s Carolinian zone, stretching from Windsor through London to Oakville and south to Lake Erie.

The trees were nearly wiped out after chestnut blight arrived from Asia in the early 1900s. By the 1920s, blight covered the entire North American range.

The fungus kills stems and branches but not the tree roots. New shoots growing from the stump or roots are often decimated in turn.

In a 2001 survey, Husband and now-retired U of G environmental scientist Greg Boland found about 700 specimens in southwestern Ontario.

The new survey found almost 600 of those original trees as well as more than 100 new specimens. That’s encouraging, says Husband, explaining that the province may be home to some 2,000 trees in all.

Says Van Drunen: “Each time we survey American chestnuts, we find more trees. We think there are a lot more trees than we thought initially.”

In the new survey, about two out of three specimens were only sapling size, less than 10 cm wide and no taller than 10 metres.

Only about 12 per cent were large, mature trees. The largest specimen, found in London, stands about 35 metres tall, says Van Drunen: “It’s an awe-inspiring tree.”

The earlier survey found roughly the same ratio of young and mature trees.

Of those mature trees, only two had produced new seedlings. “We found American chestnut was in decline through time because mortality is greater than new recruits,” says Van Drunen. “They are making fewer seedlings.”

That means that the American chestnut population is “frozen in time,” says Husband. Few specimens are producing either flowers or nuts that would lead to new young trees. “Without that, it’s a slow slide downhill.”

There’s no treatment for the blight itself; surviving trees may have genetic resistance to the fungus.

The authors recommend that conservation managers focus on increasing recruitment, or production of new seedlings.

They say managers should continue to plant blight-free saplings, both in plantations to preserve genetic diversity and around existing specimens isolated in the landscape. “American chestnut can’t self-pollinate,” says Van Drunen. “It needs a second tree nearby but often it’s the only tree in the area.” 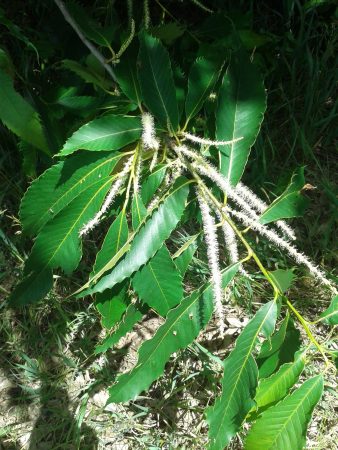 A chestnut recovery strategy was written in 2012 by a team of land managers, government agencies and academics, including the U of G professors.

It will likely take decades to restore a stable population in southern Ontario through a combination of natural regeneration and selective breeding, says Husband. “Either way, it’s going to take a while.”

Husband says another survey will likely take place in another decade or so. Periodic snapshots are an important tool for monitoring the species and ultimately for restoring it.

“We need to know the status of these trees in Ontario,” he says, adding that chestnut is just one example of how invasive pests threaten native species of plants and animals.

Invaders from long-horned beetles to emerald ash borers “are having a huge impact on many tree species. This story is playing out in many different species.”