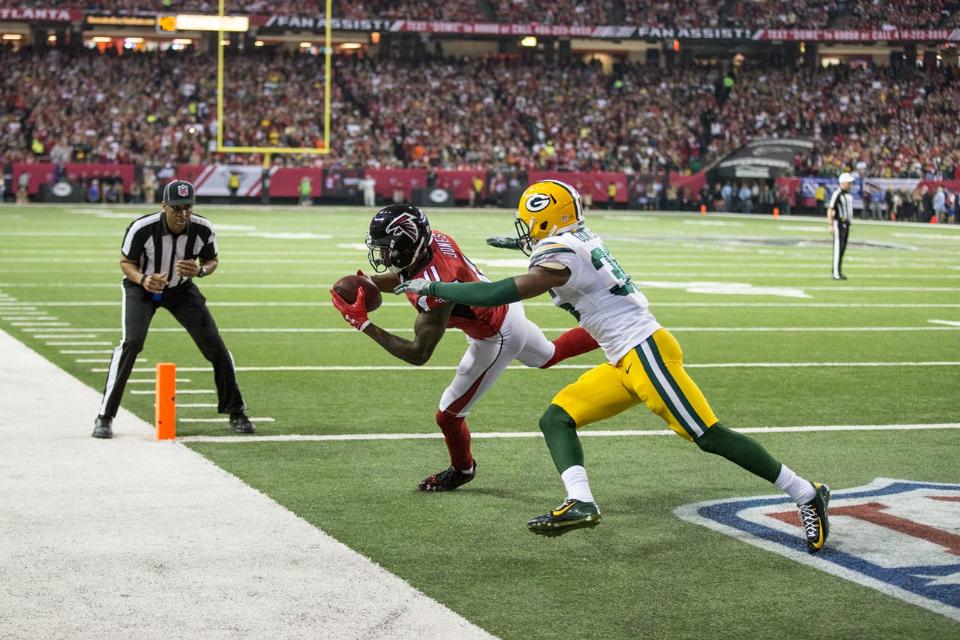 The Atlanta Falcons won their playoff game against Green Bay for the right to play against the New England Patriots in the Super Bowl Feb. 5 (from AtlantaFalcons.com)

This year’s Super Bowl will draw large audiences eager for a compelling match, but Timothy Dewhirst, a professor in the Department of Marketing and Consumer Studies at the University of Guelph, believes more drama may be found in the halftime show. 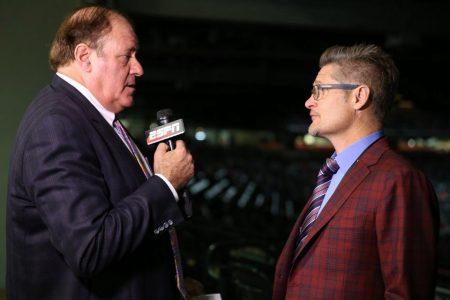 Falcons GM and U of G alumnus Thomas Dimitroff Jr. (right) is interviewed by Chris Berman of ESPN (AtlantaFalcons.com)

The game will take place between the New England Patriots and the Atlanta Falcons Feb. 5.  The Falcons were assembled by general manager, Thomas Dimitroff Jr., a U of G alumnus and former Gryphon defensive back and team captain from 1987 to 1989.

This year’s Super Bowl game returns to Houston, Texas, where Janet Jackson’s infamous “wardrobe malfunction” during halftime was witnessed in 2004.

The halftime show this year will feature Lady Gaga, and the possibility of her making a political statement at a volatile time in U.S. politics is what intrigues Dewhirst, who studies and has written about sports branding and marketing. 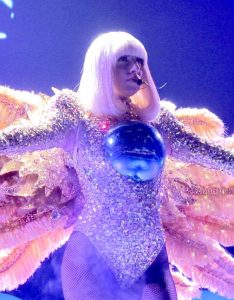 “The NFL would prefer to avoid controversial political statements during the game, but it will be interesting to see if Lady Gaga refrains from any commentary towards recent events in the U.S., given that she is ideologically opposed to the U.S. president, Donald Trump,” he said.

“We do see some political statements at halftime, such as when U2 performed in the first Super Bowl after 9/11, or Beyoncé’s performance last year, which had elements of the Black Panther party in it. Will Gaga be able to avoid saying anything given Trump’s recent moves?”

He noted politics is entering into sports more frequently.

“This NFL season has also been marked by players, led by 49ers quarterback Colin Kaepernick refusing to stand during the U.S. national anthem,” he added.

The Super Bowl halftime show has become an event in itself, especially when games get out of hand early, Dewhirst said.

Last year, more than 54 million households watched the game, representing about 70 per cent of U.S. households, according to television ratings.

“The Super Bowl halftime show is a humongous event, with performers anxious for the opportunity to perform in front of a captive audience of millions,” said Dewhirst.

“You have musicians, some about to go on tour, realizing that performing at the Super Bowl is the best advertising they could hope to receive. That’s why the NFL reportedly discussed having performers pay to appear at halftime.”

News stories in 2014 suggested the NFL, which does not pay appearance fees but does cover expenses, considered charging performers to appear in the 2015 Super Bowl. However, apparently the response from musicians was strongly negative, and the idea was abandoned.

The real financial windfall for performers comes after the event. Tracking data shows performers normally see more sales and downloads of their music after the game.

“The halftime show can make someone popular whose star has faded, or enhance the brand of a performer,” said Dewhirst.

“It’s a chance to get your message to a wide audience. The questions this year are: what message will we see at halftime? Will it be political or not? Will it become a signature moment in our culture? We’ll have to watch to find out.”