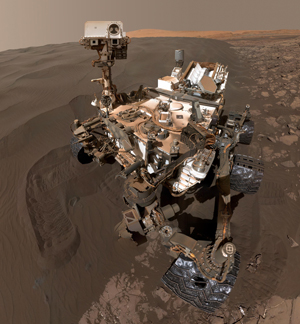 U of G’s contribution to current and future Mars missions is highlighted in a Dec. 2 CBC news story. The article looks at how Canadian scientists and inventions have helped in understanding of Mars, and discusses the APXS device on the robotic Mars rovers.

U of G physics professor Ralf Gellert led an international group of scientists that developed the APXS (alpha particle X-ray spectrometer). The APXS was Canada’s contribution to NASA’s Mars Science Laboratory rover Curiosity that is now exploring the red planet.

Mounted on the rover’s robotic arm, the device identifies which chemical elements — and how much of each type — are in Martian rocks or soil. That information can tell us about the planet’s past — including how it lost so much of its water and atmosphere some four billion years ago — and may help us understand the development of life on Earth.

APXS data arrives at U of G for analysis in a specially designed operations centre on campus. Scientists use that information to operate the rover and guide its investigations each day.