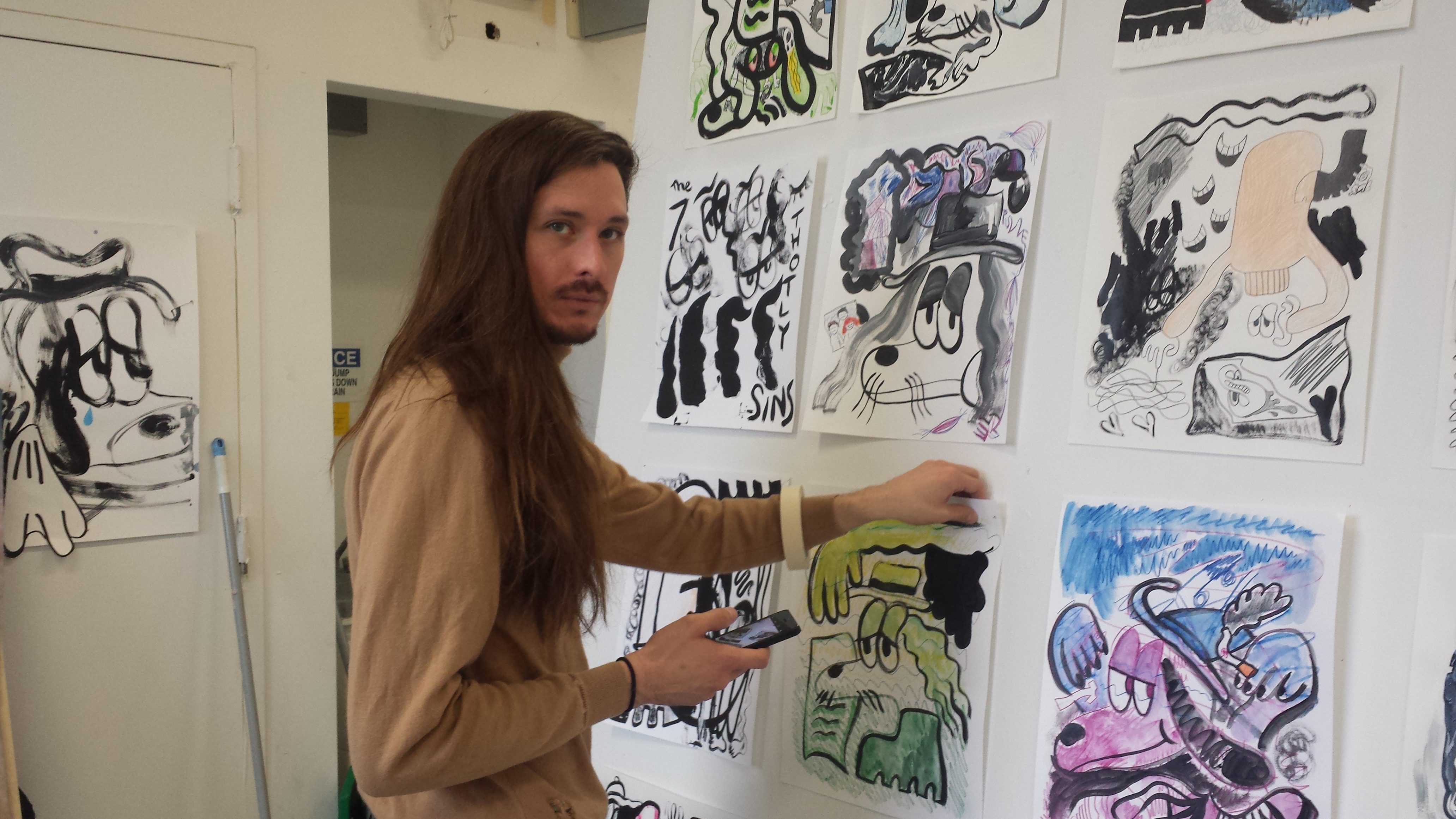 Walter Scott in his studio at the University of Guelph.

His exhibit at the Art Gallery of Ontario (AGO) will end soon, but Walter Scott’s cartoon persona, Wendy, will live on along with other characters that the illustrator plans to explore during his master of fine art program at the University of Guelph.

Wendy came to public life in 2014 as the eponymous heroine of Scott’s first graphic novel. The next in the series, Wendy’s Revenge (Koyama Press), was published in November and reviewed by The Globe and Mail.

Scott has served as artist-in-residence at the AGO since September. An exhibition, presented as part of his residency, features three original drawings from the Wendy comic series, connected by a short narrative written by Scott. It’s the third residency stint he has held in different galleries in two years.

An illustrator, sculptor and writer, Scott is exploring more aspects of Wendy as well as other fictional characters that serve equally as alter egos for their creator.

Those characters occupy part of his studio on the U of G campus. One wall of the space is covered with coloured drawings of a Snoopy-like creature — a deliberate resemblance. It’s his version of Spike, a relative of Snoopy from the Peanuts cartoons that were among Sunday “funnies” must-reads for Scott while growing up on the Kahnawake Mohawk Territory near Montreal.

The papered-over wall in his studio looks a bit like the AGO community gallery where Scott invited patrons this fall to take part in a DIY comic project intended to spark exploration and discussion of the genre.

Among the half-dozen artists who have held residencies at the AGO since 2011, Scott likely had one of the more visitor-friendly projects, says Paola Poletto, manager of the gallery’s adult learning and residency programs.

Scott provided drawing tools and templates for patrons to write and illustrate one-page comic strips, and then taped up the results for other gallery-goers to read. Poletto says about 3,000 people took part in the activity this fall.

“We always look for moments of transformative change,” she says. “The community gallery helps us think about how we engage with audiences.”

Scott began drawing Wendy in 2011 at age 25. She came to him one evening while he and some friends were kibitzing about party personas for each other, and someone told Scott his party ego should be called Wendy. “So I made a comic about Wendy, as the hedonistic, anxious side of me — the exploded version of me,”  he says.

He studied fine art and anthropology at Concordia University, experimented with video and zine publishing, and played drums in a punk band.

“A lot of the first Wendy comics were inspired by the punk scene,” says Scott, whose artistic influences include Kathy Acker, Dodie Bellamy, Matt Groening and Tanya Linklater.

They also drew on his experience of what he calls loss and yearning, as well as issues of identity that stemmed from the push and pull of hiding and exposing his aboriginal roots.

“I wanted to create a character enough like me but different enough — to talk about my experiences but not have to be me. That difference allowed me to open to other people,” he says.

“I wanted to create a project that showed how confused and messed-up I felt. Having other people feel the same way I do — it’s a really good thing.”

Wendy has appeared in public art projects in Toronto, Vancouver and Japan, where Scott spent a residency in Yokohama in 2014. This past spring, he did a month-long residency on Fogo Island in Newfoundland. This year’s Best American Comics anthology includes an excerpt from his inaugural volume.

He says the AGO residency gave him an inside look at a larger institution. In his final work there, Scott wrote seven poems that he’s printed onto oversized silk scarves to be draped in various locations throughout the gallery in early 2017.

Poletto says the AGO residency selection committee was attracted to Scott’s strong, well-defined practice. “We’re looking for artists that are trying something new,” she says. “Walter seemed to be doing something great with the genre and communicating stories that were fresh and new. He knows what he wants.”