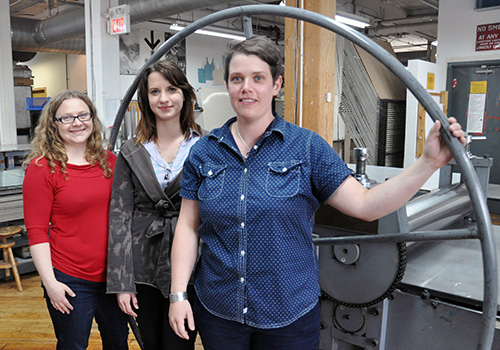 In today’s digital age, new technology becomes obsolete once the latest gadget hits store shelves, but the printing press is a centuries-old technology that has withstood the test of time. Three U of G fine arts graduates are keeping the printmaking tradition alive at Open Studio, a non-profit artist-run centre in Toronto where some of the printmaking equipment is older than the artists who use them.

For Kelly, Guelph was her top choice because of the way it combined artistic training with other disciplines. Art students are encouraged to take courses that complement their core studies, such as history and languages.

The combination of art and academics also appealed to Gaby-Trotz, who transferred to Guelph after studying at the University of Toronto and Ryerson University. “It felt like it was the right balance of technical skill, really interesting and engaged faculty, really solid academics and the ability to blend them all together,” she says.

Bydlowska took art history and studio art at U of G along with a variety of interdisciplinary courses such as botany, which helped inspire her artwork. Being able to communicate effectively about their craft is another important skill for artists to have, she says.

The founding artists of Open Studio were printmakers who wanted a dedicated space to make their art. Unlike other art forms, printmaking requires large, heavy and costly pieces of equipment that most artists can’t afford and wouldn’t be able to fit in their own homes. The printmaking process also involves toxic chemicals that require proper ventilation, which Open Studio provides in an enclosed area.

“The basic technology of the printing press hasn’t changed that much.
Part of the role that we play here is to bring print into the 21st century.”

Artists can rent a studio, which includes access to equipment and supplies. They can also showcase their work in exhibitions or sell their pieces at Open Studio. Its gallery has hosted a number of exhibitions by U of G alumni. But you don’t need to be a professional artist to learn the art of printmaking; Open Studio offers public workshops.

Teaching the next generation of printmakers is one way the studio is keeping the art alive.

“Print has seen a bit of a decline over the years because some people saw it as an antiquated process — and a lot of it is,” says Kelly. “The basic technology of the printing press hasn’t changed that much. Part of the role that we play here is to bring print into the 21st century.”

Making art by hand is also a dying art, replaced by consumer demand for instant art via digital channels. Can traditional and modern artistic techniques complement each other? Yes, says Bydlowska, who creates her ideas on a computer before transferring them to a printing press. “There’s such a tactile exhilaration of working with plates and inks and presses,” she says. “My primary work mode is using these traditional machines and using my hands.”

Gaby-Trotz enjoys the community atmosphere at Open Studio, which allows her to work independently on her art and collaborate with other artists. Printmaking fosters that sense of community, bringing artists together to share not only equipment but ideas.

“I know how pivotal a space like this can be for artists, and that’s the exciting part of my job,” says Gaby-Trotz.