Panel To Discuss Why Trump Won, Implications for Canada Nov. 18

A Donald Trump presidency could have a large impact on Canada, especially in trade, security and the environment, say University of Guelph political science professors.

The controversial Trump election campaign showcases the power of social media and the importance of crafting a compelling message that connects with people, they say, adding that the election result could also raise unforeseen challenges for Canadian politicians. 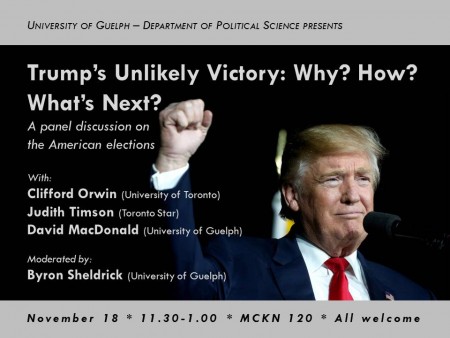 This month’s election results surprised many people looking at polls, says U of G political science professor Troy Riddell, chair of the department.

“It appears the polls underestimated how high the turnout would be from white, rural Americans, who voted overwhelmingly for Trump,” he says.

“Meanwhile, Hillary Clinton’s message did not work against such a flawed Republican candidate, and she was less sensitive than Barack Obama to concerns about borders and community. With the help of social media, Trump used identity politics to exploit white unease in rural and suburban America with immigration, social change and a lack of economic opportunities.”

While some have protested Trump’s election, both in the United States and in Canada, Riddell suggests focusing on the 2020 presidential election.

“Peaceful protest is legitimate, but protesters will have to accept the decision and begin organizing,” he says.

“Justin Trudeau wisely declined to attack Trump during the election, and my sense is he will not be overly antagonistic now. Trump appears to react very negatively to slights, so the best thing would be to engage as constructively as possible on issues such as trade, security and the environment.”

“We are closely tied to the American economy, so when their markets nosedive, so will ours. We depend on American consumers and businesses, so if they falter, we falter,” he says.

“The second issue is the rise of racist, right-wing populism, which we’ve seen with Brexit. People are angry with the loss of manufacturing jobs and a sense the state they once knew is changing.”

MacDonald says Clinton failed to effectively reach out to millennials.

“This was an election where a populist stepped into the void, with an electorate hungry for change against so-called established elites,” he says.

“Twitter was important to Trump because of his claim that the media was unfair to him, so it allowed him to speak unfiltered, which I think appealed to his supporters,” Small says.

“Normally we talk about social media opening up opportunities for people to communicate with the campaign and bring young people in. However, Trump just made pronouncements. This was not about increasing citizen participation; they were very much one-way. That said, they were extremely popular, especially with the media.”

The panel will take place in MacKinnon 120, and is free and open to the general public.