Invasive species, toxic pollutants and poor water quality in parts of the Great Lakes basin – home to 90 per cent of Ontario’s population and the drinking water source for more than eight million Canadians — are among the topics to be discussed at a high-profile conference at the University of Guelph.

About 700 researchers along with industry and government representatives will attend one of the largest-ever annual conferences run by the International Association for Great Lakes Research June 6-10.

The gathering will look at pressing water quality problems in the Great Lakes and surrounding watershed, a region that supports about nine million Canadians, including residents of eight of the country’s 20 largest cities. The basin is also home to about 24 million Americans in eight states. 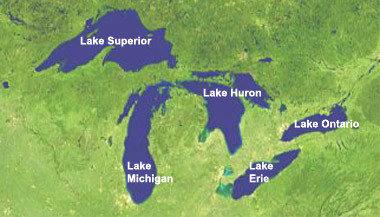 It’s important to examine not just pollution hot spots but the entire watershed whose rivers and other tributaries feed into the five lakes, says integrative biology professor Joe Ackerman. He is organizing the conference, called “Great Lakes Solutions: Integrating Across Disciplines and Scales.”

“We’re not going to find a solution through a single discipline or by looking at one point,” said Ackerman. “We have to integrate information or look at the whole system.”

Another perennial problem is hypoxia, or low oxygen levels caused by nutrients such as phosphorus entering from diffuse sources, including farm and lawn fertilizers. Those nutrients feed more algae, whose decomposition eats up oxygen in the water column, which can kill fish and other organisms in the lakes.

Hypoxia will be the topic of a conference talk by Alfred Wüest, a researcher at the Swiss Federal Institute of Aquatic Science and Technology.

William Dennison, vice-president of science applications at the University of Maryland Center for Environmental Science, will discuss the use of ecosystem “report cards” to assess watershed health.

“The University of Guelph exemplifies that,” he said. Referring to campus experts in biology, chemistry, engineering, land use and resource management, he said, “With water, we do all of these things well.”