Harnessing an invasive fish species sounded like a promising conservation tool to help reverse the destruction wreaked by zebra mussels on endangered native mollusks in the Great Lakes – except that it won’t work, says a University of Guelph ecologist.

In a novel twist on invasive species ecology, a research team led by integrative biology professor Joe Ackerman found that the round goby fish – an invader in Ontario waters — only makes matters worse for native mollusks already driven to near-extinction by an earlier zebra mussel invasion. 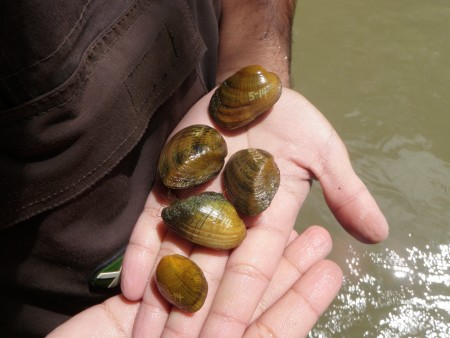 Suspension-feeding mussels living on the bottom of lakes and streams help to clean water used for everything for drinking to fishing and other recreation.

Nearly all indigenous mussel species in the Great Lakes have been largely wiped out by zebra mussels, an invader that arrived in the late 1980s. Zebra mussels disrupt normal movement and feeding of native species, as well as clogging water intake pipes and fouling ship hulls.

Many native mussels remain in rivers and streams feeding the Great Lakes, said Ackerman. With the round goby invading these so-called conservation “hot spots,” many scientists worried that the invasive fish would prey on those mollusks or out-compete native fish critical to the mussels’ life cycle.

“Mussels need fish for successful reproduction. The larva has to attach to the gills or fins to develop into juveniles,” said Ackerman.

He wondered whether the fish might help stave off extinction by serving as a new host for mussel larvae.

In the lab and in fieldwork, Tremblay compared development of mussel larvae on round gobies collected from the Grand and Sydenham rivers with larvae on the mollusks’ customary fish hosts.

Although the larvae established themselves on round gobies, few developed into juveniles in the lab, said Ackerman.

That means endangered mussels are further threatened by hampered reproduction on round gobies that essentially “wastes” larvae.

Most invaders prey on native species or out-compete them for food and other resources. Limiting reproduction is a novel strategy for an invasive species, he said.

Ackerman said the study further underlines the need to control invaders in the Great Lakes.