An almost entirely accidental discovery by University of Guelph researchers could transform food and biofuel production and increase carbon capture on farmland.

By tweaking a plant’s genetic profile, the researchers doubled the plant’s growth and increased seed production by more than 400 per cent.

The findings were published in the March 2016 issue of Plant Biotechnology Journal. 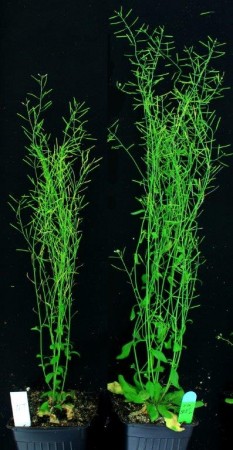 The team studied Arabidopsis, a small flowering plant often used in lab studies because of its ease of use and its similarity to some common farm crops. They found that inserting a particular corn enzyme caused the plant’s growth rate to skyrocket.

“Even if the effects in a field-grown crop were less, such as only a tenth of what we’ve seen in the lab, that would still represent an increase in yield of 40 to 50 per cent, compared with the average one to two per cent a year that most breeding programs deliver,” said Prof. Michael Emes, Department of Molecular and Cellular Biology (MCB).

Larger plants would capture more atmospheric carbon dioxide without increasing the amount of farmland, said Emes. ”Farmers and consumers would benefit significantly in terms of food production, green energy and the environment. The ramifications are enormous.”

The finding came almost by chance.

Studying the enzyme’s effect on starch, the researchers noticed that their genetically engineered plants looked different and much larger in photos taken by lead author Fushan Liu, a former post-doctoral MCB researcher.

“That’s when we realized that we were looking at something potentially much more important,” said Ian Tetlow, an MCB professor and study co-author.

“The seeds are where we would get the oil from, and consistent composition is important so that the function and use of the oil isn’t changed,” said Tetlow.

The researchers plan to test canola and other crops. Field tests and analysis with industry and government will likely take several years.

“These findings are without parallel, and we came to them almost by accident. The reason we started the work was to test some ideas in basic science. It just goes to show that you never know where that science will take you.”