Thomas King, one of Canada’s most well-known and respected authors and an English professor emeritus at the University of Guelph, will receive the 2016 Blue Metropolis First Peoples Literary Prize.

He will be honoured April 15 during the 18th annual Blue Metropolis International Literary Festival in Montreal. 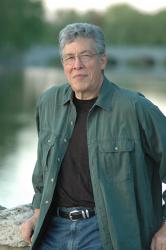 An award ceremony will be held at 5:30 p.m. at McGill University, and King will appear in conversation with Rosanna Deerchild, host of the CBC Radio program Unreserved.

This $5,000 annual prize aims to increase national and international exposure for novelists, playwrights, poets and other writers from indigenous communities.

The poet Annharte won the inaugural award in 2015. The prize is sponsored by the J.W. McConnell Foundation and the Chadha Foundation.

A writer and broadcaster, King began teaching at U of G in 1995, and retired from the School of English and Theatre Studies in 2011.

In 2015, his book The Back of the Turtle – his first novel in more than 15 years – was shortlisted for the Trillium Book Awards and won the Governor General’s literary award in 2014.

His non-fiction book The Inconvenient Indian: A Curious Account of Native People in North America won the 2014 RBC Taylor Prize and the B.C. National Award for Canadian Non-Fiction.

A member of the Order of Canada, King received the 2013 National Aboriginal Achievement Award for arts and culture.