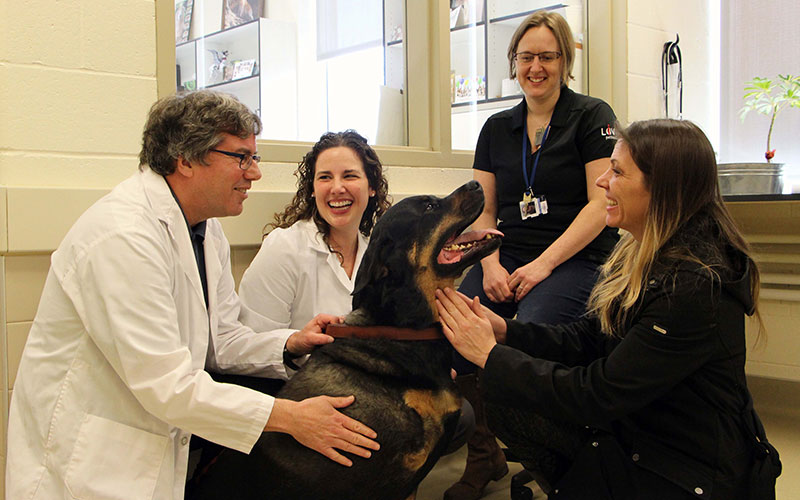 “Everything ended.” That’s how Valeria Martinez describes her feelings the day she learned that her beloved Rottweiler, Cujo, had cancer.

A bump on Cujo’s leg was diagnosed as osteosarcoma, the same type of bone cancer that killed Canadian icon Terry Fox.

Martinez came to the University of Guelph’s Ontario Veterinary College (OVC) for help. At OVC’s Mona Campbell Centre for Animal Cancer, she learned Cujo could receive treatment and take part in a new research collaboration intended to improve the quality of life for both dogs and people.

“We have more light now,” says Martinez, who lives in Barrie, Ont. “This gives us more options and more opportunity.”

Cujo is the first dog entered by OVC into a new clinical trial with the U.S. National Cancer Institute’s Comparative Oncology Trials Consortium (NCI COTC). It’s the first such collaboration between OVC and the NCI COTC, and is funded by the non-profit Morris Animal Foundation.

About 160 dogs from up to 20 American institutions and OVC will take part in the trial; OVC is the only Canadian partner. The trial is expected to last eight to 12 months.

Researchers will evaluate the effectiveness of the therapeutic agent rapamycin for treating osteosarcoma in dogs by delaying or preventing metastases.

“This is exciting for us,” says Paul Woods, a veterinary cancer specialist at OVC and co-director of U of G’s Institute for Comparative Cancer Investigation.

“Osteosarcoma bone cancer is a common cancer in dogs, and common in teenagers like Terry Fox. Our goal is to improve the dogs’ quality and quantity of life while living with cancer.”

“We’re not sure why it’s so common in large dogs,” Woods says.

Despite aggressive treatments such as limb amputation and chemotherapy, most dogs still die from metastatic disease, which usually appears in the lungs.

“Similar to what happened with Terry Fox, the cancer comes back in people and in dogs,” Woods says.

Rapamycin has been used in kidney transplant patients as an immunosuppressant, and, more recently, it’s being utilized as an anti-tumour agent, Woods says. Rapamycin inhibits a cellular pathway that is a critical regulator of cell growth, proliferation, metabolism and survival, he says.

“We are looking to see if rapamycin slows down or even prevents the metastases of osteosarcoma from coming back.”

Some of the costs for staging, surgery, chemotherapy and rapamycin are covered for dogs involved in the research trial.

As one of the dogs selected to receive standard of care therapy, Cujo has undergone surgery and is now receiving chemotherapy. Cujo will have regular physical exams and chest radiographs to monitor his health. Martinez will bring him to Guelph initially every three weeks for chemotherapy.

At first, she hesitated over the idea of surgery to remove her dog’s affected limb. “I thought: ‘How can he walk with three legs?’”

But Cujo was walking a week after the amputation. “He has no more pain, he can do everything.”

Diagnosed with osteogenic sarcoma in 1977, Fox covered more than 5,000 kilometres in 1980 in his intended cross-Canada run to raise money and awareness for cancer research. He died in 1981 at age 22 after raising more than $24 million.

“Owners think to themselves ‘Terry Fox ran across Canada with this cancer. My dog can have a leg amputated, and still run across the yard with this cancer and have a good quality of life,’” Woods said.

It also gives people a sense of hope and purpose, he added.

“Since osteosarcoma looks and acts so similar in people and dogs – aggressive, highly metastatic disease— if we find better ways to treat dogs, it may help treat people as well.”

That’s comforting for Martinez and, she believes, for Cujo. “It’s good for learning and good for others for the future. If I had to do it again, I would do it.”