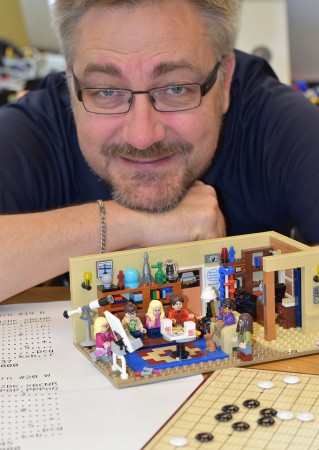 Prof. Stefan Kremer and a Lego replica of The Big Bang Theory, the sitcom that inspired his class assignment.

He doesn’t play chess. And he doesn’t watch The Big Bang Theory. So how did computer science student Patrick Hartman end up tops in a class assignment for an online chess tournament modelled after the TV sitcom?

Speed and strategy, says Hartman. His program won 53 of 58 games in a round-robin tournament run this semester by Prof. Stefan Kremer, School of Computer Science, for a third-year artificial intelligence (AI) course.

In the process, Hartman and his classmates learned more about AI — the ultimate goal for Kremer, who added the pop culture twist as another way to engage students in a regular course assignment to write chess-playing programs.

“My goal is to train students to be able to solve interesting computing problems,” says, Kremer, who is director of the school. He adds that programming machines to play games is a longstanding tradition in AI courses.

His AI assignments already involved games, puzzles and problem-solving. For this project, he assigned students to write chess-playing programs modelled after a chess version developed by the character Sheldon on The Big Bang Theory.

Unlike Sheldon’s three-player game that uses a three-sided board, Kremer stuck with a simpler two-player version. But he borrowed the sitcom’s made-up chess pieces complete with their unorthodox properties. For example, the serpent “poisons” adjacent pieces and the catapult launches other pieces to land elsewhere on the board.

After his students wrote their programs, he pitted those agents against each other in an online, round-robin tournament of games lasting up to two minutes each.

Hartman gave his game-playing agent the alias “bfischer,” a nod to Bobby Fischer, the American chess grandmaster who dominated international competitions in the early 1970s.

“I liked the idea of competition,” says Hartman, who aimed to write a program that “thought” its way quickly through possible moves and counterattacks. “It’s chess but it’s more involved than chess. There’s a lot that could happen, a lot of moves to consider and different strategies.”

For a glimpse of that smart-computer world, says Kremer, look to the recent news from South Korea. Even as his class computer tournament was playing out, a computer program triumphed over the best human player for the first time in the board game Go. The machine won four of five games played against Lee Sedol, the world’s top professional Go player in Seoul.

Played on a 19 x 19 grid with black and white markers, Go is billed as the most complicated board game ever. Each turn poses an astronomically high number of possible moves, taxing even the most sophisticated machine until now.

Instead of using brute computing power, AlphaGo developed by Google DeepMind programmers relied on sophisticated search techniques to think more like a human brain — an approach billed as the “holy grail” of AI.

“Games are a very good testing ground for artificial intelligence,” says Hartman. “The cool thing about AlphaGo is not that it’s humans trying to be strategic and think of rules for the game. It’s an actual neural network playing the game and adapting its parameters and learning to play better as it goes.

“I think the learning process is what’s interesting with AlphaGo.”

Kremer confesses to having mixed feelings about the results from South Korea. “We as humans don’t want the computer to win. We want to be better at something. Our intelligence is something that makes us human.”

Still, he says, “I think it’s really exciting. It’s really interesting — the breakthroughs made in computing science that allow this to happen.”