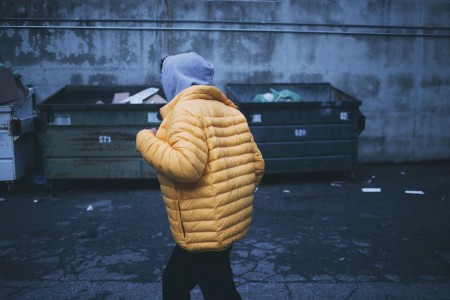 While studying waste patterns in Cambodia, she found that most household waste consisted of food scraps, whereas a food waste research project she did in Guelph with Profs. Mike Von Massow, School of Hospitality and Tourism Management, and Ralph Martin, Department of Plant Agriculture, revealed that a lot of recyclable materials were being thrown out as well as food.

“A lot of food waste is avoidable,” says Parizeau. “It’s food that could have been eaten but we have such a luxurious existence that we’re able to throw away edible food.”

Our attitude toward waste is also reflected in the way we treat waste collectors, who are often viewed as lower class, she says. “There’s a lot of stigma attached to waste and that often attaches to people who work with waste,” she says. “If we look at the way they’re treated in society, it can tell us a lot about who we are in terms of social equity and social justice concerns.”

Parizeau has also studied informal recyclers in Buenos Aires and Vancouver. Both cities have implemented a “regime of hygiene” that aims to not only clean up garbage from affluent areas and tourist attractions but also remove informal waste collectors through government policies and policing, she says. Although informal waste collectors provide a free service that benefits both society and the environment, they are often regarded as a nuisance to be kept off city streets.

Following Argentina’s economic collapse in the early 2000s, those who collected recyclables were viewed positively by the government because they were helping to clean up streets while earning a small income. “They’re not asking for handouts from the government,” says Parizeau. “They’re looking after their own economic needs. They’re mediating their own poverty.” Some street cleaners could cover 40 or 50 blocks in one night.

As the economy began to improve, Argentina wanted to attract more tourists and foreign investment. Street cleaners didn’t fit the global image the country was trying to portray.

Buenos Aires now requires street cleaners to register, wear uniforms and work in designated areas. They must also follow labour laws against bringing children with them to work. These types of regulations work for those interested in having a traditional job but not for those who prefer to work independently and set their own hours because of childcare or caregiving responsibilities, says Parizeau. More regulations may also prevent migrant workers from doing these types of jobs; finding another source of income may be difficult if they don’t speak the language, she adds.

Vancouver followed a similar path with its own informal waste collectors during the 2010 Winter Olympics, first discouraging them and then trying to regulate them by requiring them to wear uniforms and work in certain areas.

“Now we see an atmosphere of tolerance but it’s a tolerance that’s dictated by the authorities,” says Parizeau. “They’re just living their lives. Public space is supposed to be for everybody, so it’s an interesting tension.”