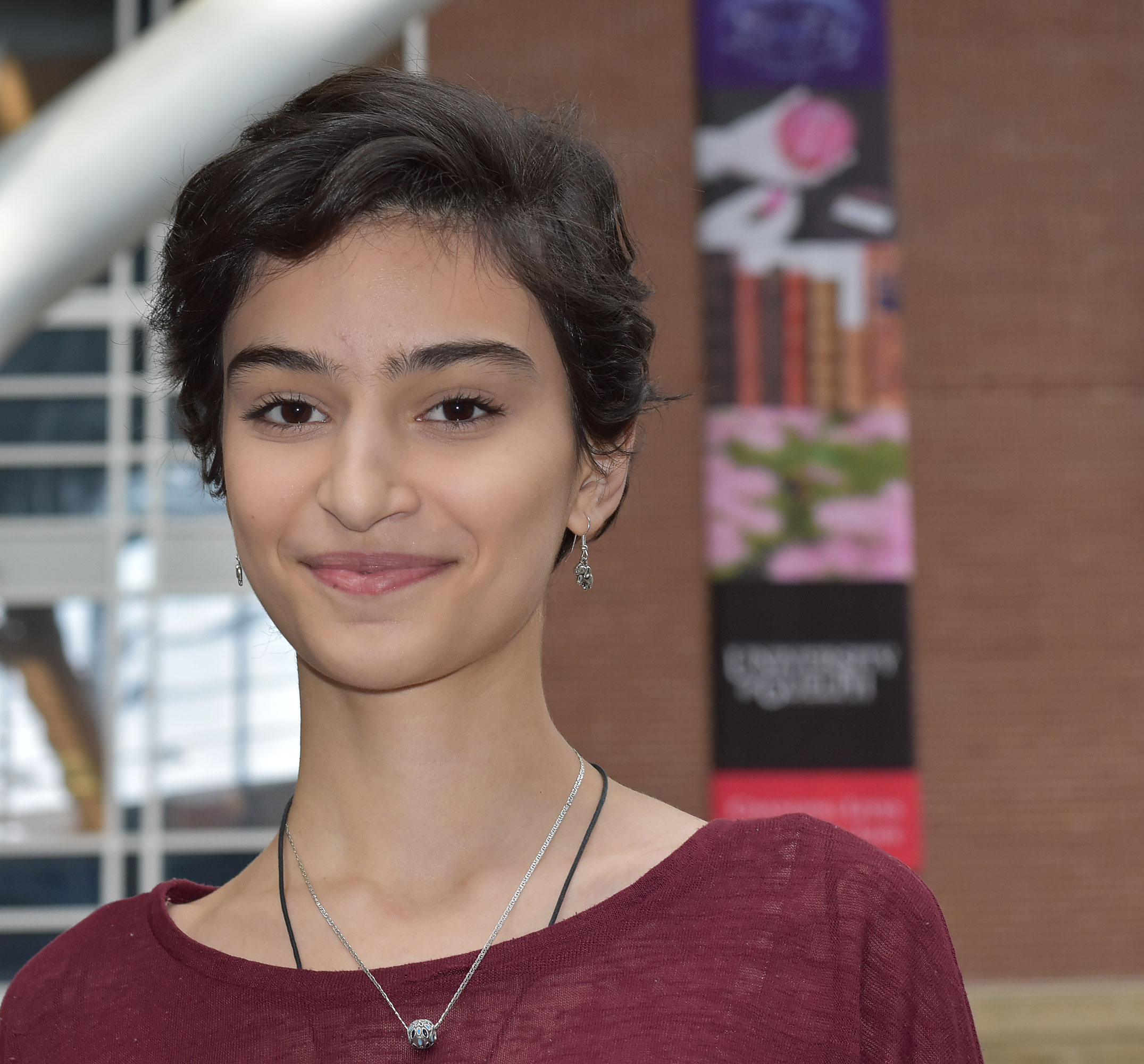 Next to her new winter clothing, that campus guide was a must-have for Kuwatly in early January. Newly arrived at U of G from Lebanon, the Syrian student needed to find her way around a snow-covered campus completely unlike anything she’d left behind in the Middle East.

“People are nice here,” she says with a slight Arabic accent. “People treat you differently than in Lebanon.”

By mid-February she had her bearings, but she was still missing her parents and siblings scattered between Lebanon and Europe.

Kuwatly arrived at U of G as a specially sponsored student under the Student Refugee Program run by the local chapter of the World University Service of Canada (WUSC), an international development organization based in Ottawa. A second student is expected to start at Guelph in the fall semester.

Since the Syrian conflict began in 2011, and especially since the militant Islamic State (IS) took over parts of Syria and Iraq in 2014, millions of Syrian refugees have arrived in camps in Lebanon, Jordan and Turkey.

Kuwatly never endured the camps. Along with her mother and brother, she travelled in spring 2013 from Damascus, Syria, to Beirut, Lebanon, where they found an apartment.

She grew up in a suburb of Damascus and went to school in the capital. She and her siblings and friends watched English-language TV and movies such as Disney offerings and Home Alone, and listened to western pop artists, including Backstreet Boys, S Club 7 and Avril Lavigne.

Her father, Mosalam, was first arrested in 2011 during a demonstration against the government’s siege of the city of Daraa. Soldiers detained him after he took photos of the event in Arnous Square in Damascus, where he owned a small cotton factory.

Kuwatly accompanied her father to the protest and was held off, screaming, when the troops arrested him. “I was going to get arrested,” she says. “I found myself sitting at the street and crying, people going: ‘Are you okay? Do you need something?’ It was heartbreaking.”

For two weeks, the family heard nothing from Mosalam; he showed up one day after being released. Later he was held for three days after confronting soldiers at one of numerous checkpoints around Damascus.

By then, frustration was mounting among the city’s Sunni population, including the Kuwatlys, over seemingly gratuitous lineups at checkpoints where they needed to show ID and over bribe-taking by officials.

Sara was nearly arrested again — this time with her mother — when government troops demanded to look through their cellphone pictures following another demonstration.

By 2012, fighting had widened to involve not just government and rebel forces but other groups, including IS, arriving from outside the country. Family members witnessed shelling around the capital and snipers had taken up posts directly across the street from their home. Along with her mother and brother, Kuwatly moved to Beirut.

She last saw her father in July 2015, before he joined a boatload of refugees crossing the Mediterranean for Greece. Kuwatly remembers saying goodbye “feeling that it was going to be the last time I was going to hug him or smell him. It was pretty hard.”

They had all heard accounts of boats sinking and occupants drowning during the sea crossing. “I convinced myself he was going to make it,” she says. A week later they received a message to say he’d arrived in Macedonia. Today Mosalam is in Germany with two of Kuwatly’s siblings.

Kuwatly started biology studies at the University of Lebanon in 2014 but withdrew after continued harassment. “People hate you because you’re Syrian or because of your religion.” A top student in high school, she applied for scholarships to universities in Europe without success. She dreamed of pursuing medicine and maybe becoming a surgeon, but says, “I was losing hope.”

Last summer, her brother in Germany pointed her to a Facebook post about the WUSC plan to sponsor Syrian refugee students at Canadian universities. Under that program, the agency would collect dossiers and candidate information for universities in this country.

Kuwatly had never heard of “Gelf,” as she pronounced the name while Googling U of G. And she knew practically nothing of Canada, except that “it was so cold here and far away.” Her online investigation turned up something even more important: Guelph was a safe place.

Her joy at being accepted was tempered by the notion of leaving her family. The worst moment was bidding farewell to her mother, a recollection that sparks tears.

She flew overnight on a chartered plane full of Syrian refugees travelling from Beirut to Canada. After staying overnight in Toronto, she was picked up by a University of Guelph team.

Kuwatly is taking a full course load this semester in a general science degree program. She’s still thinking about medical studies and plans to return to Syria one day.

“She’s very bright. She strikes me as very independent,” says Gbolahan Olarewaju, co-ordinator of international and multi-faith programs in U of G’s Office of Intercultural Affairs, and staff advisor for WUSC’s Student Refugee Program at Guelph.

Referring to her generation’s responsibilities to that divided nation, Kuwatly says, “We have a country to build.”

She says she’s still lonely in Canada, but she’s grateful for a chance to live and study in a safe place where basic rights such as education are respected.

“It’s a huge transition for me, everything is different, the people, the weather, the time difference. I sometimes feel like I’m not totally settled in here. There’s still a lot to know and do.

“I thought I couldn’t stay without my mom and here I am.”

The WUSC Guelph local committee and the Multi-Faith Resource Team from U of G’s Student Life will hold a fundraising dinner to support Syrian student refugees on March 7, 5:30 p.m., in Peter Clark Hall. Tickets are available online or at Alumni House.