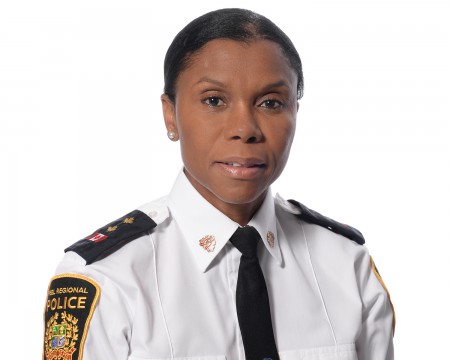 Ingrid Berkeley-Brown doesn’t consider herself a role model, even though she’s the highest-ranking black female police officer in Canada. As superintendent of Peel Regional Police, she prefers to be a mentor who helps others reach their goals, whether that’s to work in law enforcement or another field.

Even before she became a police officer, she knew she wanted to help people. As the daughter of a police officer in Guyana, she came to Canada at the age of 14. “My goal was to work with youth,” she says, so she volunteered as a probation and parole officer. That’s when she met Sid Young, a retired black police officer in Toronto, who encouraged her to join the ranks.

One of the biggest rewards of being a police officer is “knowing you’re making a difference in keeping the community safe,” says Berkeley-Brown, who is often invited to speak at community events. Catching criminals is just one part of her job; community engagement and teaching the public how to stay safe are just as important. Working in crime prevention and race relations has helped her make inroads in the community, especially the black community.

As a black woman in a male-dominated field, she says, “I bring a representation of policing – it’s achievable for other women and members of minority groups.” She was one of only two black female recruits in a class of approximately 300 at the Ontario Police College, but she never viewed policing in terms of gender. “I am a strong and confident person, so I knew I could do the job. It was a matter of gaining the trust and respect of the other officers.” She says she always felt she was part of the platoon.

When her first staff sergeant gave her a performance review, he told her, “You’ve always maintained your femininity,” which Berkeley-Brown took as a compliment. Being female can be an asset in her line of work, she says. “Policing is a lot about communication.”

Thirty years after joining the police service, she says policing hasn’t changed much; the day-to-day community interaction remains a big part of a police officer’s job. Technology has had the most impact on policing, giving officers more tools to fight crime. When she joined the police force, she used a typewriter to file her reports. Now officers phone in their reports, which are recorded electronically and transcribed. They also have more non-lethal weapons in their arsenal, such as pepper spray and tasers.

Her husband works in Peel’s Forensic Identification Services, but they rarely talk about work at home. “It’s not dinnertime conversation,” says Berkeley-Brown, but she admits to being “a junkie for forensics shows on TV” because she doesn’t get to experience that side of policing in her job.

After graduating from Seneca College, she continued to take courses for her own personal and professional development. “I always continued my studies to better myself, not just as a police officer but as a person, supervisor and manager.” As her leadership role grew, she enrolled in the MA leadership program at U of G and graduated in 2014.

She now joins the ranks of other black police officers in leadership positions, such as Mark Saunders, a graduate of Guelph-Humber’s justice studies program, who became chief of Toronto Police Services in 2015.