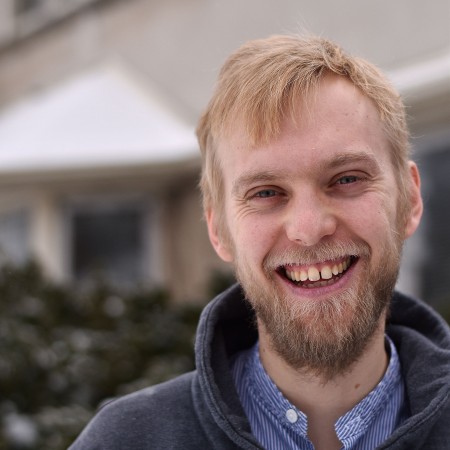 U of G is full of labs, but there’s only one Guelph Lab in town.

Under a dedicated partnership between the University and the City of Guelph called the Guelph Lab begun last year, faculty and students have teamed up with city officials on research projects intended to improve municipal operations.

Lab facilitator Sam Laban divides his time between the University and the City of Guelph. Funded jointly by U of G and the city, he matches campus researchers with city departments and projects looking for help with anything from conducting surveys and literature reviews, to holding workshops and prototyping new products and services.

The lab makes U of G and the city collaborators in research and development, says Laban, allowing both faculty and students to apply their research smarts to real-world problems.

Launched in 2015, the lab is housed at the University’s Community Engaged Scholarship Institute (CESI), one of a number of units on campus that work with community groups.

CESI director Linda Hawkins says, “CESI already builds research and teaching relationships with community. The Guelph Lab now opens new and focused ways for direct impact both outside and inside through Sam’s work.”

Since 2009, CESI’s Research Shop has connected U of G researchers with external agencies ranging from the Guelph and Wellington Poverty Task Force to 10 Carden, a social innovation group in downtown Guelph.

The shop has also worked with national groups such as Community Based Research Canada and the Living Knowledge network in Europe.

Says Laban, “We are brokering relations, but we’re also a dedicated innovation unit for both the city and the University.”

The first project involves procurement practices, or how the city buys and pays for goods and services.

Streamlining city procurement, especially for information technology to be purchased over the next three to five years, is the goal of the project. Along with city staffers, the Guelph Lab is now prototyping alternative processes.

For the employee engagement initiative, Laban and city staff members organize and run roundtable discussions with city employees. They’re drawing upon a literature review on the topic done by the Research Shop, and will design and test initiatives to improve engagement.

Typically the Guelph Lab works with city departments or groups charged with investigating specific topics. That means Laban needs to be familiar with a wide range of campus researchers in order to match city projects with U of G experts in their field.

“The University is so well-positioned,” says Laban. “We have such capacity to design and do research that has impact in the city.”

Blair Labelle, general manager of technology and innovation in the city’s information technology group, says the idea for the Guelph Lab arose from discussions about “how to open up government and become more innovative. We wanted to look at ways to improve what we do, engage more, and be more open and transparent.”

The novel partnership gives practical experience to students and enables U of G to support civic change, “not something that immediately comes to mind as an output of a university,” says Labelle, co-chair of the lab along with Hawkins.