You never know when you will need the services of the United Way. But when you do, having the support means everything.

That’s a popular United Way tagline that U of G staff member Jill Ferguson has repeated for years.

Before joining the University’s Co-operative Education and Career Services, Ferguson worked for two non-profits that relied on United Way funding.  She’s also volunteered with the University of Guelph’s campaign for more than a decade.

She’s used to talking about how the United Way supports essential services that make a difference in people’s lives.

She just never imagined that it would be her life. 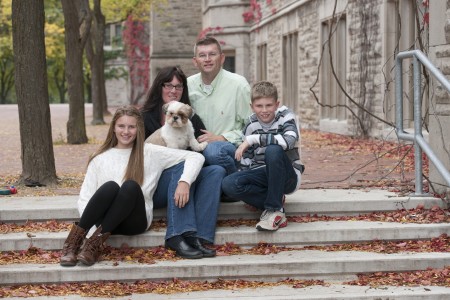 In 2012, she and her family found themselves dealing with an unexpected terminal cancer diagnosis, and were connected with Hospice Wellington.

“I’ve said that line so many times, but now I think about it differently,” Ferguson says.

“It’s true: you never know when you will need help. I didn’t know anything about hospice before, never knew the service was available and certainly never imagined I would ever need it. But when you do, it’s so important that it’s there.”

Ferguson’s in-laws, Wayne and Corry, had been an intimate part of her life since she married their only child, Jeff, and especially since their children, Camryn and Evan, now 15 and 13, were born.

“The grandparents were central in their lives from Day One,” Ferguson says.

When Wayne’s recurring cough turned out to be stage-four lung cancer, the family was devastated and disoriented. In only weeks, Wayne, a non-smoker, went from being an active volunteer ski instructor to being unable to perform basic tasks.

“Wayne always said that when the day came that he could not brush his teeth on his own, he wanted to go to into hospice.”

Ferguson and her mother-in-law knew little about Hospice Wellington before that day came, shortly after the winter holidays.

“When Corry phoned that morning, they just said, ‘Bring him in.’”

The moment they arrived at the facility, located at the intersection of Kortright Road and Scottsdale Drive in Guelph, Fergus said a weight lifted.

“They took care of everything,” she says. And they did it with great efficiency, respect and care, from making sure that Wayne’s room was comfortable and homey to providing fresh-baked goodies to welcoming visiting friends to gently turning away visitors when necessary.

Her children were reluctant to visit at first. “They kept saying they didn’t want to see Opa like that,” Ferguson says.

Her son finally went. “When he came home, he kept telling Camryn, ‘You have to go, you have to,’ and she finally said: ‘Ok, why do I need to go?’ And Evan said, ‘Because they have cookies!’”

Her daughter visited the next day. “I think it was a matter of: ‘How could a place with cookies be scary?’ It normalized it for them.”

Hospice Wellington made the unbearable as bearable as possible, to the very end, she says.

Ferguson was at work when she got the call. She was the first to arrive; her husband and mother-in-law had further to drive.

“When I got to Wayne’s room, the hospice director was on one side of him and a nurse was on the other. They were both holding his hands.”

Everyone made it in time to say goodbye. Once again, Hospice Wellington took care of everything.

“If they weren’t there, I don’t know what we would have done,” Ferguson says. 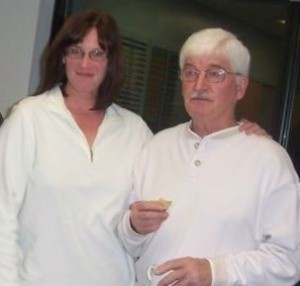 “It made me want to continue what I am doing, being a United Way volunteer.”

Hospice Wellington is one of 90 local agencies supported by the Guelph Wellington Dufferin United Way. U of G’s campaign runs through 2015, with key fundraising times being November and December. The 2015 goal is $607,500, a nod to the local United Way’s 75th anniversary.

Ferguson tells people that their contributions help people in need in our community. But they may also be helping themselves.“You never know when you will need something or what’s going to happen. No one knows what’s in store for them.”