It’s September – time for student move-in, new classes and the launch of U of G’s annual United Way fundraising campaign.

For campaign co-chairs Patricia Tersigni and Prof. Catherine Carstairs, the event is a reminder of the United Way’s impact on this community – and a source of motivation to support the organization’s efforts.

“We live, work and play here so it makes sense that we give our time, talent and even some of our hard-earned dollars here, too,” says Tersigni, director, academic programs and policy. 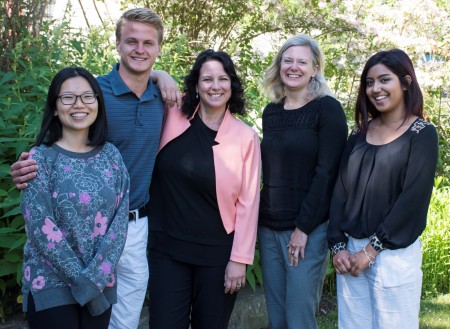 Carstairs, chair of the Department of History, adds: “The United Way campaign on campus provides us with ways to get together as a community through a variety of events. We get to know the people we work with better and, at the same time, we know that all of these fundraisers help to make our community a better, stronger place.”

During the event, president Franco Vaccarino will reveal this year’s fundraising goal.

Tersigni says she’s overwhelmed not just by how much money the University contributes in each campaign but also by the number of volunteer hours invested by students, staff and faculty.

“We never know when we personally, or someone close to us, might need the services of an agency, be it hospice, Big Brothers Big Sisters, Action Read or Women in Crisis. Ninety-seven programs at 55 agencies benefit locally from the dollars raised in our community.”

Ferguson, who works in Co-operative Education and Career Services and belongs to the United Way campaign steering committee, received much-needed support when her father-in-law was diagnosed with stage-four lung cancer. He had to be admitted to Hospice Wellington.

“It’s true, you never know when you will need help,” Ferguson says, recalling the shocking diagnosis for her father-in-law, a non-smoker. “I didn’t know anything about hospice before, never knew the service was available and certainly never imagined I would ever need it. But when you do, it’s so important that it’s there.

“They took care of everything.”

Kimberly Hu, a student campaign co-chair and a fourth-year human kinetics major, says: “As a part of the University of Guelph, we have a responsibility to give back to the community that has become our home during our time here.” Sasha Monteiro and Matthew McCoy join Hu as student co-chairs.

“The U of G cares, there is no doubt about it,” says Tersigni. “To see that impact year after year and see that investment made through those dollars and volunteer hours is a great source of pride for the University community.”