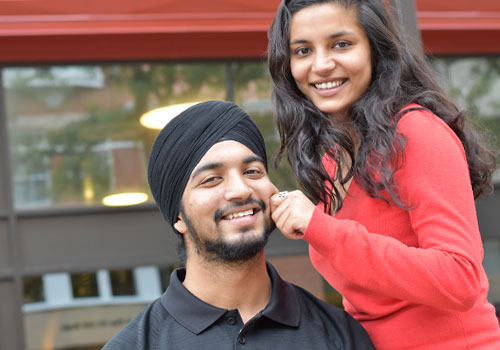 Finding new friends at university might be a challenge for any first-year student, let alone an international student adjusting to life and studies in a new country.

That’s why Pallak Arora was glad to take part in U of G’s Start International program in 2011.

Newly arrived that summer from Amritsar in India’s Punjab province, she enrolled in the orientation program offered through the Office of Intercultural Affairs (OIA) in Student Life.

Held before Orientation Week each fall, the three-day program helps introduce Guelph to students arriving from around the world, and to help them establish themselves in a new country and on a new campus.

Arora says Start International helped her meet people from different parts of the world. “I still have those friends. I needed to find a community.” The experience also got her excited about campus life. She became an OIA ambassador and an international student volunteer.

This fall, Start International attracted about 200 students newly arrived in Canada. In all, about 300 students have landed from abroad this semester to begin full degree or exchange programs.

They face a range of challenges, from homesickness, culture shock and isolation, to new foods, cultural norms and the weather. Helping students get past those hurdles is the point of Start International, says program director Gbolahan Olarewaju, OIA co-ordinator of international and multi-faith programs.

Besides the important goal of connecting students and helping them establish a peer network, the program offers sessions on issues ranging from academic challenges to cultural transition. Students learn about resources and services, including Co-op Education and Career Services, counselling, financial services and the library. They even go on a shopping trip for supplies.

Mostly, says Olarewaju, the program shows new first-year students from abroad that they’re not alone. “They get to see other people go through the same struggles with their transition to life at university, and in Guelph and Canada generally.”

Olarewaju arrived in Canada in 2006 from Nigeria. A year later, he began an undergrad degree in biomedical sciences. He has since completed a master’s degree in the Department of Human Health and Nutritional Sciences, and still hopes to become a doctor.

He loved the Guelph campus, but it took about two years before he found a circle of international friends here.

Looking back, he figures he might have been less lonely had he enrolled in Start International. “I didn’t get a chance to meet a lot of my international peers. I didn’t make those first friends.”

Arora graduated this past spring in international development. She is now pursuing a master’s degree in capacity development, and plans to study mental health issues among international students.

Start International helped smooth her way into Canada and helped her find friends. But she had to battle homesickness and anxiety. “Without Start International, it would have been a lot worse. I knew people on campus could help me.” She has since volunteered for the program, including speaking about her own experience to new arrivals.

One of those newcomers is her younger brother, Gunpreet. After a year studying in India, he transferred to the marketing program at Guelph in 2014.

He says Start International last year helped him orient himself to campus, especially U of G food outlets like the Bullring and the Grad Lounge. “There’s a lot of practical stuff you need to learn.”

Jasmeet Jassal says the program has helped him figure out how to manage life independently. He arrived from India this fall to begin studies in mechanical engineering.

Tobias Krabel arrived this fall as an exchange student from Germany, where he’s completing a master’s degree in economics at the University of Mannheim. He says Start International “made me more open-minded about how to approach and talk to people.”

Madison Van Caugherty says the program helped her sort out logistical details such as obtaining a health insurance card. She arrived this fall from New Jersey to begin a major in European studies.

Start International introduced her to other foreign students and gave her a few clues about cultural differences between Canada and the United States. It also gave her a chance to answer a few questions about her own country, including the current nomination process for presidential candidates.

“Once in a while I’m asked about Donald Trump. I’m like — please, no.”