Kelly Hodgins could pack up and head back to the farm in Powell River, British Columbia, anytime.

“My heart is on the farm and in agriculture,” says the Guelph grad and staff member. She grew up on several farms in Canada and New Zealand before coming to Guelph to study geography for her master’s degree.

“Farming is an incredibly noble endeavour,” she says. “Providing food for your community and working with ecosystems to grow food and raise animals in a way that respects and contribute to a healthy environment.”

So why is she still here in Guelph?

Hodgins says working at her alma mater — billed as “Canada’s food university” — allows her to make a bigger impact. She’s project coordinator for Feeding Nine Billion based at U of G.

That project, run by geography professor Evan Fraser, is intended to develop ideas for feeding the world’s growing population, expected to reach nine billion people by 2050.

In Canada, about four million people, or 13 per cent of the population, lack access to affordable, nutritious food, says Hodgins.

It’s not that we lack enough food, she says. The problem is a dysfunctional food system that effectively favours well-off consumers and stigmatizes low-income Canadians forced to rely on food banks and other donations. 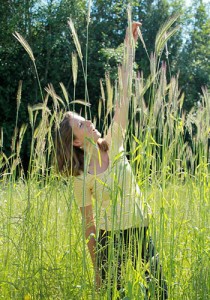 Hodgins grew up on the family dairy farm in Abbotsford, B.C. During her early teens, the family moved to New Zealand to run another dairy farm. Back in Canada a few years later, they acquired the farm in Powell River.

Hodgins studied geography at the University of the Fraser Valley. For her master’s degree with Fraser at Guelph, she studied the role of businesses in food security for Canadians. She joined the Feeding Nine Billion project as a staff member earlier this year.

Growing up, Hodgins saw the food system mostly as a matter of ensuring income security for the farmer. But after the B.C. government introduced a farmers’ market coupon program, she started seeing new people — elderly consumers, single mothers — at the family market stall. In particular, she began to see how people were treated differently, and even unfairly, by the food system.

In Powell River for the past two summers, she organized a local-food community dinner on the family farm. Those events raised thousands of dollars for additional market coupons and helped raise awareness of food security.

Following the competition, students will be able to take a credit course and work with mentors to further develop their ideas. They might take part in further contests, such as the international Thought for Food competition.

“Developing ways to sustainably and equitably feed the world’s growing population is the challenge of this century,” he says.