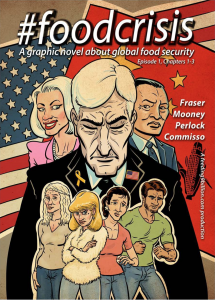 A University of Guelph professor will mark World Food Day by releasing the third installment of a graphic novel about food security and kicking off a new campaign to support the book’s educational outreach.

Evan Fraser, a geography professor and holder of the Canada Research Chair in Global Food Security, created the graphic novel, #foodcrisis, to connect with high school and undergraduate students.

“There is no question that our global food system is in crisis,” Fraser said. “My hope is that #foodcrisis will provide a fun yet educational way to engage with these issues and start having a conversation about where we go next.”

The graphic novel imagines the possible collapse of the world’s agricultural system. Set in the year 2025, the story includes issues such as land grabs, rising food prices, inequality and climate change.

“One of the major inspirations for this story comes from the food crisis of 2008-2012,” Fraser said, including stories of often-violent reactions worldwide to food price increases during that period.

#foodcrisis is the latest in a series of learning tools developed by Fraser under his “Feeding Nine Billion” project, created to spark discussion through social media about feeding the Earth’s ballooning human population. The first three episodes of the novel are available online.

“I believe that, as an academic, my job is not only to do cutting-edge research about the global food system but to make that information accessible to as many audiences as possible,” he said. “But #foodcrisis is more than just a work of fiction because all the elements of the plot are based on the history of past food crises like the dust bowl or the Irish potato famine, only I’ve imagined these things happening in our own near future.”

The graphic novel comes with 12 essays and numerous footnotes about the world’s food system.

Its artwork was done by Scott Mooney, an educational illustrator and U of G graduate. He and Fraser have collaborated on several “Feeding Nine Billion” initiatives.

Funding for the project has come from a Trudeau Fellowship awarded to Fraser by the Pierre Elliott Trudeau Foundation. Fraser is the first U of G professor to receive the honour.

Fraser has launched a fundraising campaign to pay for printing of a soft-cover book and for shipping of 150 copies to high school and undergraduate teachers across the country. He hopes to raise $5,000. Donors will receive pdf or bound copies of the book. More information is available online.

Fraser joined U of G in 2010 and is currently a visiting professor at the Liu Institute for Global Issues and the Peter Wall Institute at the University of British Columbia. He has raised awareness of the social and environmental consequences of food price volatility and sought ways to reduce waste in global food systems. He co-authored the book Empires of Food: Feast, Famine and the Rise and Fall of Civilizations.

Fraser also communicates his ideas and research through the media. This week, he had opinion columns in the Ottawa Citizen, Vancouver Sun, The Guardian and on CNN online. He is also taking part in an eight-part series on food security that is running in the Globe and Mail.