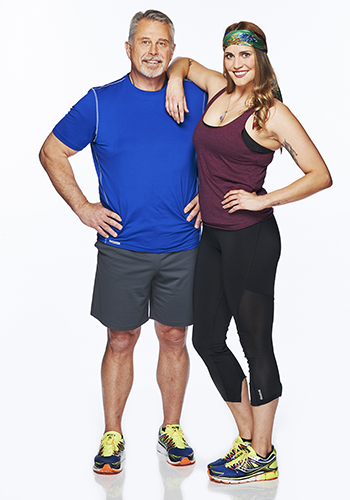 After being eliminated from Season 3 of The Amazing Race Canada, U of G assistant football coach Neil Lumsden has no regrets. Competing with his daughter, Kristin, was one of the show’s highlights for him.

“I’m so happy I did it with Kristin, who was an awesome teammate,” he says. “Our experiences are lifetime memories. It was incredible.” Completing challenges around the world together strengthened their already close bond, he adds. Even when things didn’t go their way, they learned from each other and their mistakes.

During his football career, Lumsden won three Grey Cups with the Edmonton Eskimos and also played for the Toronto Argonauts and Hamilton Tiger-Cats. He’s coached with the Gryphons for five seasons. Even with his athletic background, Lumsden admits he found some of the challenges on the The Amazing Race Canada physically demanding. At 62, he was the oldest competitor on the show. “I learned my knees aren’t as young as they used to be,” but that didn’t stop his competitive drive. “I learned that I’ll never stop wanting to compete.”

The race was gruelling at times, with some parts taking two days to complete, including hours of air travel across multiple time zones. “There’s not a lot of sleep,” says Lumsden, adding that he and Kristin were so focused on completing the challenges that eating and drinking became secondary. “We joked that it’s the ‘amazing race’ but it’s also the ‘amazing jog’ because you’re running everywhere.”

The duo was the sixth team eliminated after taking a two-hour penalty on a challenging flight schedule test that involved matching time zones and flight durations to create a 25-hour itinerary. Also difficult for Lumsden was seeing his daughter buried in sand for hours in an earlier race challenge. Kristin suffered hypothermia as a result and spent 90 minutes in hospital.

The duo’s goal was to have as many memorable experiences as possible on the show, and that’s exactly what they did, says Lumsden. They even became dance partners for some of the challenges, performing the Nimitook (an aboriginal hoop dance), the Rapa Nui (a Polynesian dance) and the tango.

Visiting countries as a contestant was nothing like being a tourist, he adds. “We had no time to do anything.” They experienced each country by airplane, car or on foot, but he credits the show for blending cultural experiences into each challenge.

They also approached each challenge as a family and as a team. Both strong-willed competitors, they respected each other even when they didn’t see eye to eye. “Just like in sports, when your head coach makes a decision, whether you agree or not, you support them,” says Lumsden. “Not everyone’s always on the same page, but we were more of a democracy than a head coach in sports would be.”

They also developed greater respect for each other. Neil says his wife, Donna, noticed a different rapport between him and Kristin after they returned from the show.

“We all need to stretch who we are to find out what we’re capable of on an ongoing basis,” he says. “This is without question one of the toughest things I’ve ever done, but I loved it. There’s nothing you can’t do.”