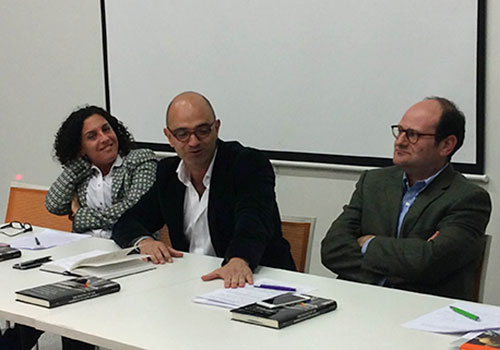 Jordi Diez, centre, at his book launch at the Canadian embassy in Chile. Photo by Paulina Vilches.

Latin America has been a traditionally Catholic and conservative region. So how have countries there become leaders in enacting legislation permitting gay marriage, even ahead of many American states and European countries?

Seeking answers to that question led Jordi Diez, a professor in U of G’s Department of Political Science, to study the topic in Argentina, Chile and Mexico. What he learned is the subject of his new book called The Politics of Gay Marriage in Latin America, published this year by Cambridge University Press.

In the first comparative study of its kind, his book argues that much of the answer lies in the ability of advocacy groups to form alliances to push the debate. Some of those groups have long roots.

The oldest gay rights movement in Latin America began in Argentina in 1967. That was two years before the Stonewall riots in New York that led to the gay liberation movement in the United States, says Diez.

Argentina was the first country in Latin America and the second nation in the Americas to allow same-sex marriage in 2010. Diez says he was surprised by the rapid progress made there, including lack of opposition in the Senate to a law expanding rights to transgender people.

Following a Supreme Court ruling this year, same-sex marriages are performed throughout Mexico.

In the United States, equality activists have often framed gay marriage in terms of family rights, says Diez. He says proponents in South and Central America have found a more powerful argument by stressing democracy and human rights.

Another lesson is the old strength-in-numbers idea. Diez says “the take-away from Latin America is the importance of forming alliances with other groups,” including human rights organizations, feminist groups, intellectuals and academics. Those groups include the Argentinian Federation of LGBT People and, in Mexico, an ad hoc alliance for gay marriage. “They were the first to link sexual and human rights,” says Diez.

That linkage succeeded after politically repressive regimes ended in certain Latin American nations. “You can’t have a debate in authoritarian regimes,” he says. “When you have repression of the sexual movement, it’s impossible to do much.”

In Chile, a weak gay rights movement has generally failed to cement relations with other organizations. Diez says so-called elites fearing reversion to military rule in that country have been careful not to make waves. Civil unions for same-sex couples will be recognized in that country starting in October.

“There hasn’t been a discussion about democracy,” says Diez. Within Chile’s governing coalition, the Christian Democracy party holds veto power and can easily block passage of controversial legislation.

For his research, he conducted about 250 interviews with various subjects including politicians, activists and clergy. He was surprised at how readily same-sex marriage was approved in the countries he studied.

He says gay marriage proponents generally “think of the issue as one of human rights and democracy, and opponents consider morality. What you have is world views colliding.”

His book launch was sponsored by the Canadian embassies in all three countries, where Diez and other academics held discussions on the topic.

In a news release about the launch, Canadian political attachee Sara Cohen said Canada was pleased “to help foster an open dialogue on these issues in Chile.”

In 2005, Canada became the fourth country to recognize same-sex marriage.

Diez is now writing a book about the courts’ treatment of abortions in several Latin American countries. “I like to study controversial topics. These topics mobilize people.”