It’s soybean oil, but maybe they should call it “saw” bean oil.

If all goes well with the test program in the Bruce Peninsula — home to the trail’s most northerly stretch — he hopes to see bio-based oils used in volunteer tree-cutting along the entire footpath tracing the Niagara Escarpment from Niagara to Tobermory, Ont. The escarpment is recognized as a UNESCO World Biosphere Reserve.

He expects these products will prove to be better for the environment and health than conventional fossil fuel-based oils — all without sacrificing chainsaw performance in clearing hazardous limbs and trees from the popular trail.

Soy-based oils are made from renewable plant materials and are intended to decompose rather than build up in the environment.

A certified sawyer, Moccia has volunteered with the Bruce Trail Conservancy for several years and regularly helps with trail maintenance.

That group looks after the entire 900-kilometre main trail and another 450 kilometres of side trails. About 400,000 people each year visit Canada’s oldest and longest footpath for hiking, cross-country skiing and snowshoeing. 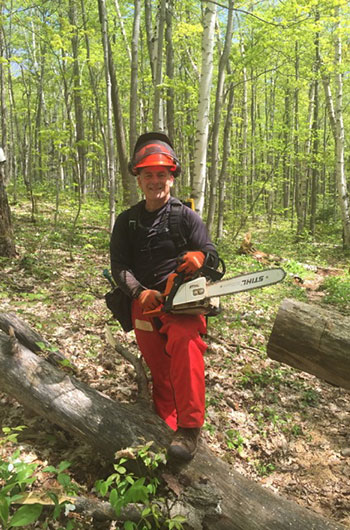 Moccia belongs to the Peninsula Bruce Trail Club, which maintains a 250-kilometre long stretch between Wiarton and Tobermory.

Last year he cut a few hundred trees. “That’s a fair bit of engine oil and chain lubricant. I suggested to the local trail committee that we consider switching from fossil fuel oils to biodegradable, plant-based oils from Renewable Lubricants.”

Renewable Lubricants is an Ohio-based company whose products are distributed in Canada by DM’s Bio-Based Fluid Supply Inc. in Bolton, Ont.

The company is supplying engine and sawblade oils for Moccia’s test this year. For the past six years, it has also supplied soy-based products to help run U of G fleet vehicles, and landscaping and snow removal equipment on campus.

The company was introduced to the University and to Moccia through Soy 20/20. Based in the U of G research park, Soy 20/20 brings together government, university and industry partners to find markets for soybean-based products. Moccia represents U of G on Soy 20/20’s board of directors.

This year’s informal chainsaw trial is taking place on the Bruce Peninsula, where Moccia has a summer home.

By mid-May, he had spent three full weekends using the club’s two-stroke Stihl chainsaw to fell about 50 hazardous trees on the trail.

He paid attention to such factors as startup, cutting speed and lubrication, engine responsiveness, and tackiness (how the oil sticks to the chain rather than being flung off). He also plans to monitor long-term wear and tear over the cutting season.

In an email to Renewable Lubricants president Don Marentette earlier this month, Moccia wrote of the engine oil: “The smell is different, too. It reminds me of cooking at home with canola oil, which makes me hungry.”

Moccia says soy-based oil costs about 10 per cent more than premium synthetic products. He figures that extra expense will be easily outweighed by the green benefits.

“The Bruce Trail Conservancy is more about environmental protection and ecosystem management than it is about hiking trails. Hiking these amazing trails is almost a secondary benefit of the Conservancy.”

Also connecting the trail and the University is Philip Gosling, one of the five founding members of the Bruce Trail in the 1960s.

The Gosling Foundation — an ecological organization established by Philip and his wife, Susan — funded the Gosling Research Institute for Plant Preservation at U of G in 2011.