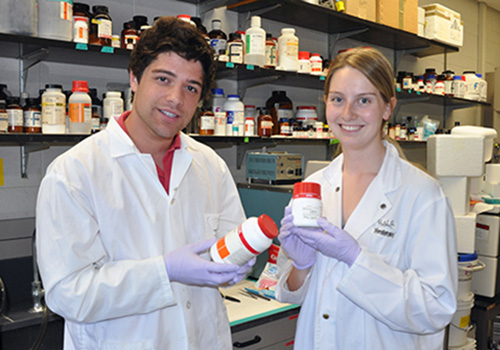 University of Guelph researchers in the Department of Human Health and Nutrition are studying the role of niacin (or vitamin B3) in tumour cells when used in conjunction with traditional chemotherapy.

“Cancer drugs are really toxic,” says Prof. James Kirkland. “The main toxicity that cancer patients get from their medication is bone marrow suppression.” Patients often need to stop their treatment when their blood cells get too low, he adds. Once in remission, they face a higher risk of developing secondary cancers such as leukemia.

Kirkland began studying the side effects of cancer drugs on rats that had normal levels of niacin, those that were niacin deficient and those that were given niacin supplements. Once their treatment ended and they were fed a normal diet, many of the rats developed secondary leukemia.

“It was all pretty sensitive to niacin status,” he says. “The niacin-deficient rats had more bone marrow suppression during treatment and they had higher levels of these longer-term leukemias.”

Kirkland says that cancer patients could benefit from significant niacin supplementation to help reduce some of the side effects of their treatment. Since cancer patients are often niacin deficient, they could be more vulnerable to the side effects of chemotherapy. However, further research is needed to determine how niacin affects cancer treatment itself. “Our understanding of niacin status and the overall impact on cancer therapy is just scratching the surface at this point,” he says.

Kirkland’s team is studying two types of cancer cells and how they respond to different levels of niacin.  Previous studies show that higher niacin levels may help reduce the side effects of chemotherapy and increase cancer cell death. But large doses of niacin may also have a protective effect on some types of cancer cells, which is a potential risk to cancer patients. In his research, cervical cancer cells responded well to niacin supplementation and died, while colon cancer cells did not.

“We’re interested in knowing if niacin or vitamin B3 might have a role in the treatment and prevention of cancer,” says Taylor McKay, a master’s student studying cervical and colon cancer cells with Kirkland. “Instead of researching novel chemotherapeutic agents, we’re trying to work hand in hand with currently existing chemotherapy regimens.”

Niacin is involved in energy metabolism, adds McKay, as well as DNA repair and cell death. Being deficient in niacin forces the body to direct its remaining niacin stores toward energy production. “The first thing to go would be your body’s ability to repair DNA properly, and that has implications for the development and progression of cancer,” he says.

Niacin is found in foods such as eggs, meat, dairy and enriched grain products.

Dogs are ideal cancer research subjects, says Kirkland, because they live in the same environment as their human owners and often develop the same types of cancer. The combination of cell culture research and canine studies could provide enough evidence to support niacin supplementation in human cancer patients, he says.

“Even if niacin has a small trend toward improving chemo efficacy, or even if they were the same and you knew that the side effects were lower and the long-term leukemias would be less, you could start to promote the idea of human studies.”