Two studies published today in Nature will help with re-assessing the status of the European Union moratorium on the use of neonicotinoid pesticides intended to protect bees, and could influence related policy decisions in Ontario, said a University of Guelph professor whose News & Views analysis of both research papers appears in the same issue of the journal.

Prof. Nigel Raine, the Rebanks Family Chair in Pollinator Conservation in the School of Environmental Sciences, was invited by Nature to analyze two studies that examined the impact of neonicotinoids on bees.

Beekeepers and many researchers have suggested that insect pollinators, such as bees, are susceptible to neonicotinoids and that these pesticides can lead to bee health problems and increased pollinator deaths.

Raine was interviewed by Nature for a podcast and by Radio Canada and US National Public Radio. 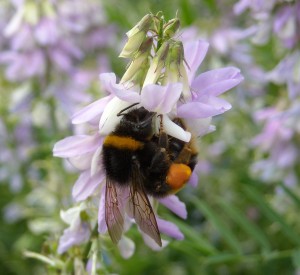 He has studied the effects of neonicotinoids on bees and is among researchers who have called for more studies on the potential effects of this class of pesticide, banned by the European Union in 2013 for two years, on bumblebees and solitary bees.

Raine said the Nature papers — one based on a lab study, the other on a field study — will help as regulators and politicians debate the effectiveness of the European ban and implementation of the proposed 80 per cent reduction in neonicotinoid-treated seed for Corn and Soy crops in Ontario by 2017.

“These findings suggest that the health and reproduction of wild bees could be affected as a result of exposure to neonicotinoid seed-treatment applied to crops attractive to bees.”

He said that in the lab study bees sought out neonicotinoid-treated sugar water over untreated sugar water. This surprising result might be caused by pesticides binding to receptors in the bees’ brains resulting in addiction- or craving-like responses.

“When assessing pesticide safety for pollinators we currently study only honeybees. These new results strongly suggest we also need to consider pesticide impacts on bumblebees and solitary bee species.”

Raine said more research is needed to help balance the risks for insect pollinators associated with pesticide exposure against the value of these products in augmenting crop yield and quality.

“Using neonicotinoid seed treatments only where and when they are needed to control intense crop pest problems could reduce the overall levels of exposure to bees and other insect pollinators,” he said.

“It would be unfortunate if the recent focus on neonicotinoids led unintentionally to broader use of alternative pesticides that prove to be even more harmful to insect pollinators and the essential ecosystem services they provide.”