If humans were to ever set up a colony on Mars, what would we eat and what technologies would be needed to grow that food?

Dr. Evan Fraser pondered those questions during the early days of the pandemic lockdowns, when faraway travel plans seemed very far away indeed.

The director of the University of Guelph’s Arrell Food Institute (AFI) started a texting conversation with Dr. Lenore Newman, a University of the Fraser Valley professor who, like the U of G researcher, studies global food sustainability.

That conversation led to a recently released book co-authored by the pair entitled Dinner on Mars: The Technologies That Will Feed the Red Planet and Transform Agriculture on Earth.

“This book started out as a thought experiment during a time of great uncertainty,” said Fraser. “But it became a serious look at the future of agriculture. And almost everything I learned about for this book I’ve learned through my many colleagues at U of G.”

At AFI and with U of G’s Food from Thought project, Fraser considers ways to create a global food system that can adapt to economic and climate change and provide adequate nutrition to more than eight billion people.

He regularly interacts with U of G colleagues studying soil and plant science, such as Dr. Claudia Wagner-Riddle in the School of Environmental Sciences. He speaks with vertical faming experts such as Dr. Mike Dixon and Dr. Thomas Graham in U of G’s Controlled Environment Systems Research Facility and nanotechnology researchers such as Dr. John Dutcher in the Department of Physics. And he works regularly with U of G and community partners on ways to develop local, circular food economies.

Technology and expertise needed to feed colony on Mars within reach 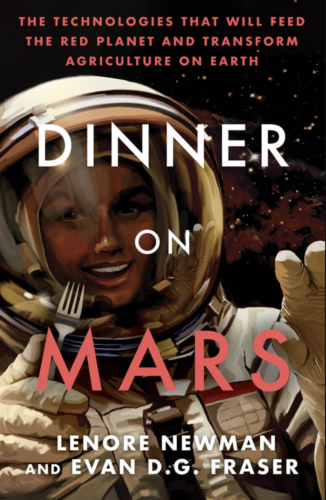 What he’s concluded is that the technology and the expertise needed to feed a colony on Mars is not that far off.

They include things like cellular agriculture, food nanotechnology, regenerative agriculture and vertical farming.

But the key to making those technologies work on Mars, Fraser says, is hyper-efficiency. That efficiency would need to be applied to everything, from water to energy and waste.

“On Mars, every organic molecule would be precious, so you would use everything,” he said.

Mars colonists would farm a small amount of land with as few inputs as possible and return every scrap of waste from one system back into use for another, he said. The result would be something akin to the natural regenerative cycles on Earth.

“What’s interesting is that when you start thinking about how to feed a community in an environment where everything is scarce, you end up designing a food system that looks a lot like one that we could use here on Earth,” said Fraser.

‘Technology is not a panacea. It alone cannot solve all our problems’

Beyond technology, the value of human energy would also be used differently.

“There would be no system built on the backs of migrant labour the way it is across most western countries,” he said. “Instead, there would be automation and robotics doing the manual labour. That move to automation is what the future of agriculture on Earth looks like, too.”

Humans would be relied upon for their minds in designing and analyzing, because on Mars, “every farmer would need to be a scientist,” said Fraser.

As upbeat as Dinner on Mars is about technology, it is not a “techno-topian” book, said Fraser. The book makes a strong case for the need for good policies to back the technologies, tax structures, regulations, financial incentives, and land use zoning laws to support the imagined transition.

“Technology is not a panacea. It alone cannot solve all our problems. What we argue is that these tools, used in the right way and supported with the right policies, can help.”

Dinner on Mars was recently featured on CBC Radio’s Ideas, and Fraser and Newsman recently wrote a piece for CNN Opinion.

Fraser hopes the book’s musings on Mars will appeal to sci-fi and tech geeks. He also hopes its ideas spur policy makers and anyone concerned about the future of food to improve our own planet’s food systems.

“As fun as this book was to write, the fact is we’re never moving to Mars en masse. It would just be too hard,” he said. “Mars is not really a Plan B, so we better figure out how to protect what we have here on Earth.”