CannonFire is a spicy hot sauce grown, brewed and bottled by students in the Department of Food Science. The sauce has been such a hit since its launch three years ago, students decided to develop a sweeter sister sauce dubbed Hot Tropic.

A blend of pineapple, hot peppers and spices, Hot Tropic packs a medium level of heat that offers a peppery taste of the tropics that many have missed after 18 months of restricted travel. 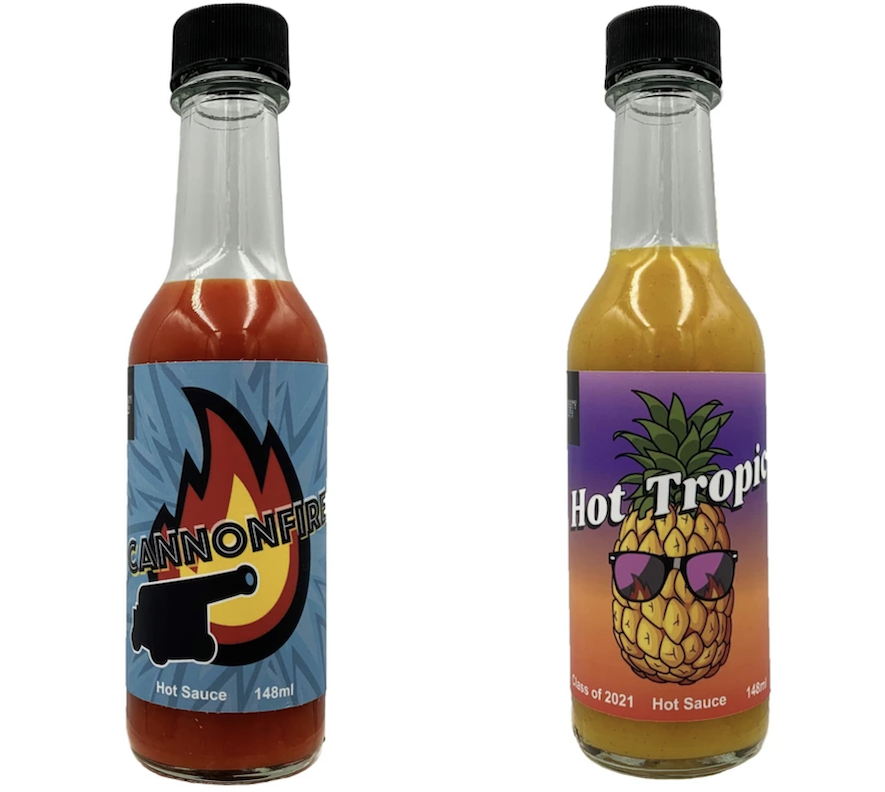 The classic CannonFire, meanwhile, is a fiery blast of habanero, cayenne and Trinidad scorpion peppers that’s named in honour of Old Jeremiah, the naval cannon that’s a landmark on campus.

Both sauces are made using peppers grown from seed at the U of G Bovey Teaching Greenhouse on campus.

“Hot Tropic is a flavourful hot sauce reminiscent of the tropics with some Caribbean flare,” she said. “It’s a really good sauce for those who want something on the sweeter and fruitier side with a comfortable amount of heat. I think it would go really well with seafood, tacos, or just about anything.”

Food science student volunteers tended to the growing and harvesting of the peppers over the spring and summer with the help of greenhouse technician Rodger Tschanz, a sessional lecturer in the Department of Plant Agriculture.

Students were involved in the sauce recipe creation, label design and manufacturing. Every pepper was hand-picked and chopped by students, and processed and bottled at the Guelph Food Innovation Centre (GFIC).

GFIC director Derek Vella launched the hot sauce project back in 2018 as a student-created “seed-to-shelf project” to give students hands-on learning experience in food production.

“Our hope is that this will be an opportunity for students to experience the entire arc of concept ideation to product launch and have something that represents their year,” he said.

Given the sauce’s quick success, the plan is to continue to offer the classic CannonFire sauce along with a limited-edition “signature” sauce each year, in consultation with each cohort of Food Science student volunteers.

Each bottle of sauce costs $10 if bought in person with cash and $11.75 if ordered online.

The sauce will be made available for purchase to U of G students, staff and faculty only at Fair November in UC Courtyard on Dec. 1 and 2.

Online orders will be available for pick up at the Guelph Food Innovation Centre, Dec. 1–3.

All proceeds will go towards funding next year’s hot sauce project and other Food Science student activities.