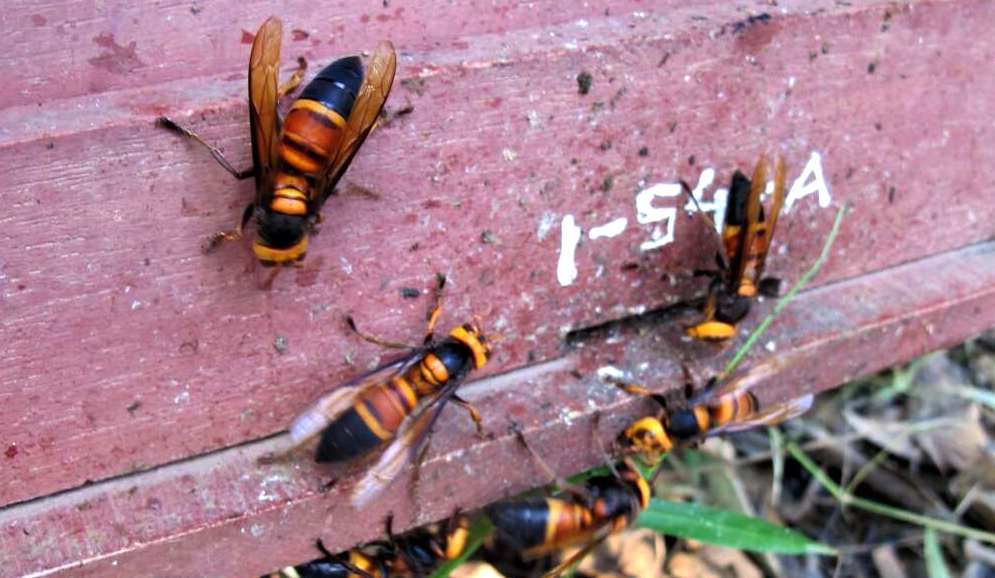 Like setting off alarms in a beehive, Asian honeybees use complex signals to alert nest mates about giant hornet attacks, according to a new study co-led by University of Guelph researchers.

The study shows that honeybees recognize and respond to different types of hornets using several signals, a kind of alert system that is better known among social mammals and birds, said Dr. Gard Otis, professor emeritus in the School of Environmental Sciences within U of G’s Ontario Agricultural College.

This is the first time that invertebrates have been shown to use differing signals in response to different species of predators.

The study in Royal Society Open Science by a team of North American and Vietnamese researchers shows that Asian hive bees (Apis cerana) give specific “calls” in response to giant hornets, their worst predator. 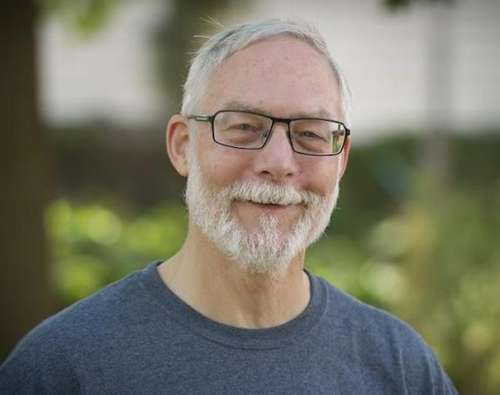 The two main hornet predators of honeybees in Vietnam, where Otis has run long-time fieldwork, have very different bee-hunting methods.

Yellow-legged hornets (Vespa velutina) typically hover outside the hive and pick off returning forager bees. Giant hornets (Vespa soror in Vietnam) pose a greater threat. After finding a colony of bees or other social wasps, they recruit their nestmates to slaughter many of the adults. The hornets then occupy the nest and harvest the grubs and pupae to feed their own developing larvae.

The researchers discovered that bees use several sounds to quickly spread an alarm message throughout the colony about nearby hornet predators.

“I literally could not believe what I was hearing”

“We stumbled into these sounds by accident,” said Otis, who was studying another aspect of Asian bees with a research team including Dr. Heather Mattila, a U of G grad who is now a professor at Wellesley College in Massachusetts.

During fieldwork, they heard unusually loud noises coming from a hive that had just been visited by a giant hornet. “I literally could not believe what I was hearing,” said Otis. “I could hear the bees from a metre away.”

From recordings taken inside hives during hornet visits, the team detected different sounds. But they needed a way to digitally isolate and make sense of the sounds. 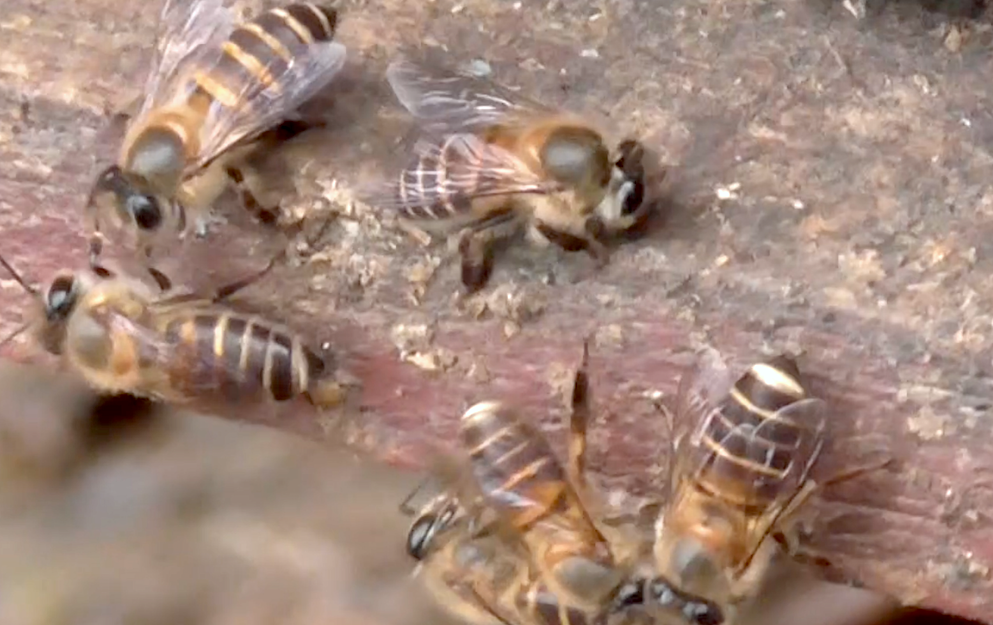 Asian honeybees at a hive ((Photo by Heather Mattila)

“The process itself was pretty arduous at times,” said Kernen. “For each recording, we had to mark out individual signals by hand, and we revisited recordings multiple times to double-check them.”

“These signals are striking and have acoustic properties that are designed to get the attention of colony members, just like the sounds that are shared among alarmed groups of mammals and birds,” said Mattila. “For human observers eavesdropping on the bees, their sounds convey a sense of urgency that feels somewhat universal.”

Honeybees communicate extensively through vibrations transmitted in their combs within the nest. Much less commonly, they communicate through air-borne sounds. It is unclear how bees transmitted “vibroacoustic signals” to their nestmates in this study.

Asian hive bees were already known to produce several vibroacoustic signals, including “hisses” and “stop signals.” The team found that both signals are emitted more often in response to hornets.

When giant hornets were outside the hive, however, the bees also produced previously unrecognized signals with abrupt shifts in frequency – called “antipredator pipes” by the researchers. Antipredator pipes share characteristics of alarm shrieks, fear screams and panic calls of primates, birds and meerkats.

The researchers captured video of several bees making antipredator signals as they ran over the fronts of hives, rapidly vibrating their wings and exposing a gland as they piped. Those behaviours suggest that antipredator pipers were also alerting their nestmates with several types of signals, said Otis.

“Our research shows how amazingly complex signals produced by Asian hive bees can be,” said Otis. “We feel like we have only grazed the surface of understanding their communications. There’s a lot more to be harvested.”

This research was funded by the National Geographic Society Committee for Research and Exploration.