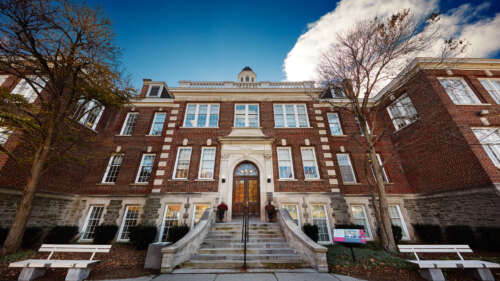 The University of Guelph and the Ontario Veterinary College were featured on  “Jeopardy!” recently, prompting a flurry of high-fives, shout-outs and shares on social media during the holiday weekend.

U of G was the clue, and veterinary medicine the question, during the July 2 broadcast of the long-running U.S. television quiz show.

The episode included the category “Canadiana,” with the $800 clue stating: “Hog cholera prompted the founding of North America’s oldest one of these colleges, at the University of Guelph in Ontario.”

McKenzie Miller, a clinical trial researcher from Cincinnati, was the first contestant to buzz in with the correct response, saying “what is veterinary medicine.”

While it is not known whether hog cholera had anything to do with OVC’s founding, U of G’s Ontario Veterinary College is indeed the oldest veterinary college in Canada and the United States. It began in Toronto in 1862, moved to Guelph in 1922 and became a founding college of U of G in 1964 (along with the Ontario Agricultural College and Macdonald Institute).

OVC is known internationally as a top veterinary school. This year, it was fifth worldwide — and first in Canada — in the World University Rankings.