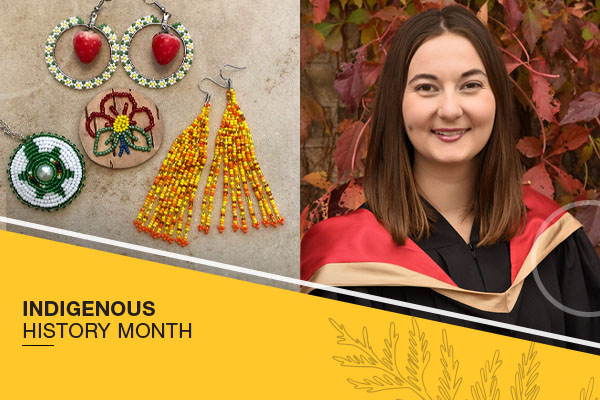 For Leslie Fell, who grew up in the small town of Trenton, Ont., the move to the University of Guelph to study molecular biology and genetics was a big one.

“I chose Guelph for the beautiful campus but also, coming from a small town, the sense of community I felt here made the transition easier,” she said.

U of G is also where Fell began to fully learn about her heritage. Though she had always known she had Indigenous heritage, she had never fully explored it.

“It wasn’t until my third year of undergrad that I finally started going to the Indigenous Student Centre,” she said. “Until then, I was too nervous. But I quickly met so many friendly people and began taking part in events and workshops.”

Not only has she now learned more about Indigenous culture and history, but she has also connected with her own First Nation — the Kijicho Manito Madaouskarini Algonquin First Nation — and has fallen in love with the traditional craft of beading. Jewellery-making and creating beaded art are now some of her favourite stress busters between studies.

It was also at the Indigenous Student Centre that Fell learned of the many financial supports U of G offers to Indigenous students to continue their studies. She applied for and received an Indigenous Graduate Scholarship.

Established in 2016, the award was created to recognize academically outstanding First Nations, Inuit and Métis students pursuing graduate studies in any discipline.

Fell is now entering her second year of a master’s program in applied statistics.

“I chose to stay on at U of G because I liked the size of the statistics department, I found an adviser I clicked with and a research project that I’m passionate about,” she said.

That research has her analyzing data as part of a study on bacterial contamination in well water in the Wellington-Dufferin-Guelph region. The study aims to identify the environmental and temporal risk factors that lead to well contamination.

“I really like this project because the analysis that I’m doing can become something that public health officials can actually use to help people understand what can lead to contaminated well water,” she said. “It can have real impact on lives.”

Improving lives is one of the goals of the recently expanded Indigenous Graduate Scholarship.

Besides the existing academic merit award, a new category added in the 2021-22 academic year recognizes applicants with significant leadership experience in an Indigenous context and/or whose research will have significant impact for Indigenous peoples.

With an annual base of $300,000 per year, the Indigenous graduate scholarship budget is a significant one, especially compared to other Canadian universities.

It means that the University of Guelph can provide awards of $30,000 (over two years) and $60,000 (over four years) to multiple Indigenous graduate students like Fell, most of whom are also receiving standard financial support through Graduate Teaching Assistantships and Graduate Research Assistantships.

“The scholarship has taken a lot of the financial stress of graduate studies off me,” said Fell. “It’s relieved me from getting another part-time job so that I have a bit more free time to connect with my culture and the community of people I have met at the Indigenous Student Centre.”

Dr. Cara Wehkamp, special adviser to the president on Indigenous initiatives and a contributor to the update, said expanding the terms of the scholarship is intended “to generate more impact and to recognize better the particular nature of some of the research completed by Indigenous graduate students and the researchers themselves.”

In addition, applicants with extra responsibilities to their communities are eligible for up to $5,000 to support research costs for remote travel, knowledge mobilization and community engagement, among other things.

A $5,000 top-up will also be available to First Nations, Inuit and Métis graduate students who attract competitive external awards, such as those provided by the federal tri-agencies.

In addition to this graduate award, U of G offers several scholarships, bursaries and financial support for Indigenous students, both undergraduate and graduate.

“It’s wonderful to see U of G expanding its Indigenous initiatives, including through financial awards that recognize excellence,” said Fell. “It’s exciting to know that more people will have access to this funding opportunity to allow them to pursue a graduate program they might not otherwise have been able to pursue and also engage in research that could help their communities.”