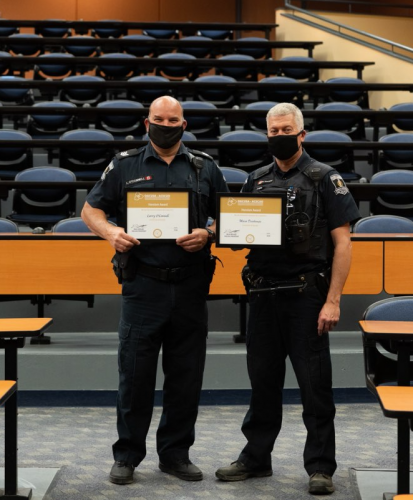 Two special constables with the University of Guelph Campus Community Police (CCP) have been honoured as heroes for saving an elderly man’s life this past winter.

The Ontario Association of College and University Security Administrators gave its Heroism Award to constable Mario Deschamps and sergeant Larry O’Connell for saving the life of a Guelph senior citizen. A virtual ceremony was held last week.

The 78-year-old man suffered a fall into deep snow one afternoon in mid-February while on the U of G campus. During their patrol, the two officers discovered him near Cutten Fields. Unable to move due to an existing medical condition, he had lain in the snow for about three hours in minus 22 C temperatures before being discovered.

“From a distance over a snowbank, we observed a black glove,” O’Connell recounts. “We attended the area and located an elderly male in medical distress. We offered on-scene medical assistance and contacted an ambulance.”

The man had been walking his neighbour’s dog at the time. The officers also recovered the dog.

The duo were recognized for their quick actions to shield the man from the cold and keep him comfortable until an ambulance arrived and took him to the hospital. Deschamps and O’Connell also visited the man’s wife to let her know what had happened.

The man required hospitalization. An attending doctor said the man would have died had he not been found and cared for.

“Being a part of campus police, it brings me great joy to be recognized with this award,” Deschamps said. “My personality is all about helping others, and this position provides me with that opportunity.”

O’Connell said the two were in the right place at the right time and had the good fortune to locate the man and the proper training and experience to care for him.

“I feel very humbled about being recognized for this award,” O’Connell said. “I feel that all campus police are attracted to the job because they want to help citizens, students and staff. It is not just part of the job, it’s also who I am as a person.”

David Lee, director of CCP, said the officers’ exemplary actions reflect the work ethic and culture of the organization.

“What they did that night is typical of the level of care that all the CCP officers provide on every shift, on every day,” Lee said. “They go that extra mile because they care about the members of our community, as well as those who visit campus, as in this case.”

The CCP officers are professional in every sense of the word, he added, taking pride in their work and driven to make the U of G campus the safest in Canada.

“I am very proud to be associated with these officers,” he said. “We work hard every day to ensure that the staff, students, faculty and visitors can conduct their activities in the safest environment possible.”

The CCP service was established in 1967 and is one of the longest-serving campus policing services in Canada.