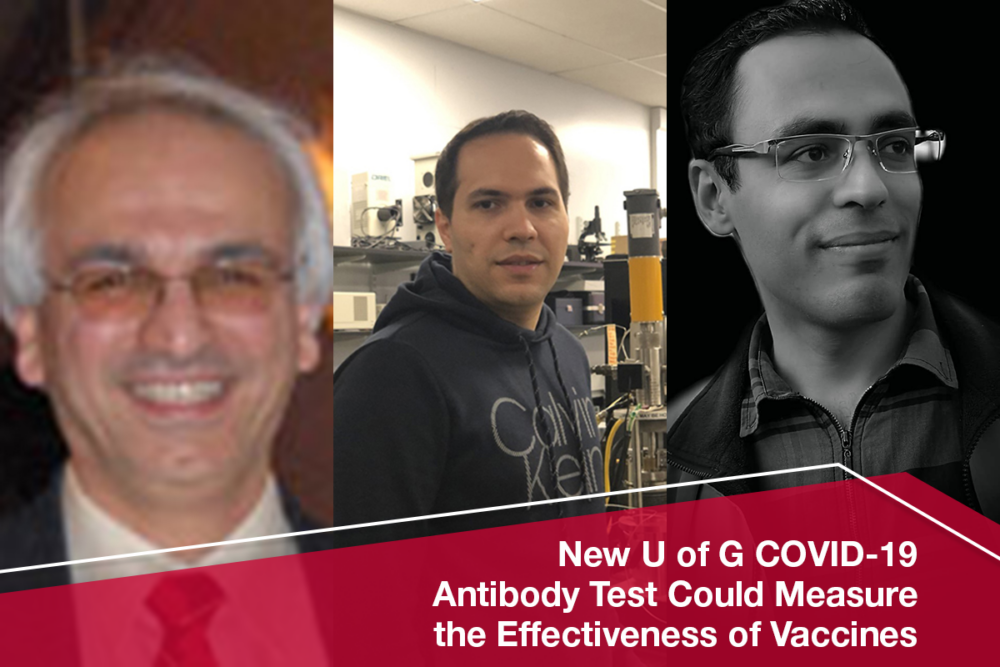 New University of Guelph technology that measures the concentration of COVID-19-fighting antibodies in the blood could be used to assess the effectiveness of vaccines, particularly as new variants of the virus arise.

This inexpensive test-on-a-chip takes less than 30 minutes and can help help health-care professionals pinpoint individuals who may have developed an immune response to SARS-CoV-2, says chemistry professor Dr. Khashayar Ghandi.

He now plans to test his solid-state electronic device for detecting antibodies against more contagious viral variants circulating in Canada. He hopes to bundle the technology into an inexpensive portable device for rapid testing use by health-care professionals.

The test, developed by Ghandi and graduate students Arash Fattahi and Pooya Afaghi (now a U of G research assistant), is described in a new paper published in the journal Catalysts.

Vaccines prompt the immune system to make antibodies against the virus or its more contagious variants. Existing methods can detect COVID-19 antibodies but without rapidly quantifying them. By accurately measuring the concentration of different antibodies in patient samples, this new test can help doctors more precisely gauge the effectiveness of vaccines.

Assuming that antibodies for the COVID-19 variants are distinct enough, Ghandi said, “as different vaccines are being made, this device would make it possible to quantitatively measure the impact of vaccines towards different variants.”

He hopes to test the sensor on antibody samples from patients infected with those new variants.

“This could be a perfect tool to see whether there’s a difference in antibodies from patients with different variants.”

Ultimately, that information can also help doctors, epidemiologists and public health officials predict when herd immunity would be reached, meaning that enough people have been vaccinated or developed immunity to halt the disease spread.

The team’s sensor uses electrical changes on a metal oxide chip to accurately measure the concentration of the antibody in a patient sample. The changes are caused by reactions involving biomolecules on the surface of the antibody.

He said the device could also help health care providers gauge a patient’s stage of infection, including when they are less likely to pass the virus to others. Implementing this application would need further collaboration with physicians, said Ghandi.

The team tested the device with Covid-2 antibody samples from a scientific supply company.

Earlier, he and graduate student Cody Landry developed a novel method to make nanostructure-based semiconductors with applications in various industries. They found that a similar device could be used to detect and quantify pathogenic fungi and bacteria.

“We showed that as we changed the concentration of antibodies in the sample, we could see the change in the electrical response in the device,” he said.

Ghandi said various chips to detect patient antibodies for disease pathogens and to detect pathogens themselves could be inserted into a hand-held, point-of-care diagnostic device. He figures such a device might be made for less than $200 and individual testing chips for about $5.

“This inexpensive diagnostics device would enhance local, national and international collaboration to mitigate the rapid spread of pandemics and to study the effect of treatments and vaccines on different generations, genomes or genders, not only now but also in future pandemics,” he said.

“Since the device will be inexpensive, it can be used without the need to go to hospitals,” Ghandi said, adding that the instrument might be especially useful in remote locations and Indigenous communities.

“This results in accessing and implementing timely and relevant clinical management approaches, such as virtual care and guidelines, or non-hospitalized care and follow-up.”

This research was funded by the Natural Sciences and Engineering Research Council.