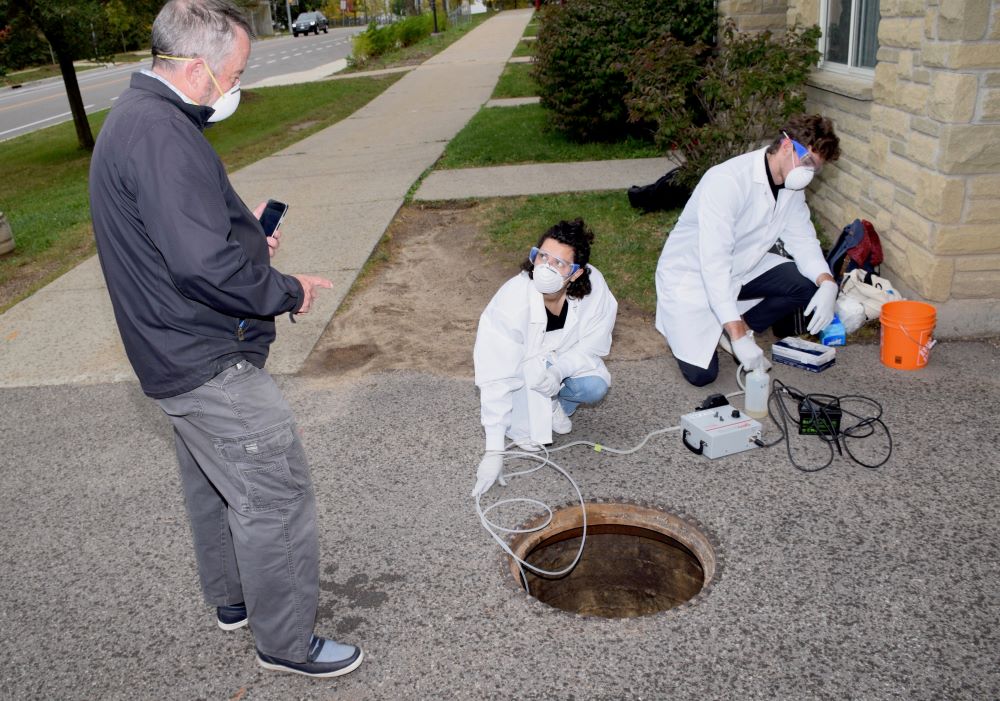 The COVID-19 pandemic has reignited interest in wastewater surveillance, where sewage systems are monitored for the presence of viruses, bacteria and other pathogens. Non-infective fragments of the virus’s genetic material have been found in untreated wastewater in Italy, Spain, France, the United States and Canada.

Several cities are now using the approach to detect the infection, including Ottawa. At least one U.S. university has used wastewater surveillance to identify a COVID-19 outbreak, ordering the testing and quarantine of the nearly 300 students living in four campus residences — and stopping its spread.

As a microbiologist with expertise in the surveillance of foodborne pathogens, such as Salmonella and E. coli, I’m always interested in better ways to identify infections in populations.

Disease identification currently relies on sick people to seek medical help. But many sick people do not seek help and officials may be unaware of illnesses or outbreaks for days or weeks, leading to more illness and death. To address outbreaks of infectious disease, such as COVID-19, we need active surveillance systems that don’t rely on the actions of sick people.

Wastewater surveillance works because many infectious agents are excreted in bodily fluids, before and during active infection. When these fluids enter sewage systems, they are transported to a central wastewater treatment facility for processing where they can be detected.

The utility of wastewater surveillance was first recognized during the 1960s, when researchers at Yale University conducted several experiments to assess the efficacy of polio vaccination campaigns. They tested the sewage in Middletown, Conn., for various strains of the polio virus before, during and after the vaccination program.

Thirty-five years later, the sensitivity of wastewater surveillance to monitor polio virus vaccination programs was confirmed in an elegant study that came to be known as the Helsinki polio virus experiment.

Scientists flushed a polio vaccine down a toilet 20 kilometres away from a wastewater treatment plant. The researchers then collected wastewater samples from the facility over four days, and showed they could still detect the vaccine after 800 million litres of wastewater had passed through the system. They concluded that one infected person shedding the polio virus could be detected in a community of 10,000 residents.

Other research demonstrated that outbreaks could be predicted by monitoring wastewater. For example, in Israel in the 1970s, infectious polio virus was detected in sewage nine days before doctors identified the first case. This approach was later adapted to monitor the success of polio vaccine campaigns internationally.

These experiments laid the foundation for the use of wastewater to monitor other diseases.

In 2013, researchers in Sweden reported that wastewater surveillance provided early warnings of outbreaks of norovirus and hepatitis A virus, two causes of foodborne viral disease. Daily wastewater samples were collected every second week between January and May 2013 from a wastewater treatment plant in Gothenburg. Using a technique called the polymerase chain reaction, or PCR, the researchers detected the norovirus’s genetic material two to three weeks before identifying sick people.

Multiple strains (genetic types) of hepatitis A virus were also detected in wastewater samples using PCR, and additional analysis showed that two strains were involved in an ongoing outbreak in Scandinavia and in Gothenburg during the spring of 2013.

Researchers in Italy used a similar approach to show that hospital patients suffering diarrhea of an unknown cause were in fact infected with noroviruses.

One limitation of wastewater surveillance is that it cannot identify the actual people who are infected. “Social media syndromic analysis,” in which social media posts are searched for descriptions of symptoms consistent with a given disease, has emerged as an effective tool for surveillance of infectious diseases including COVID-19.

Putting wastewater monitoring and social media analysis together could detect community outbreaks that might have otherwise gone undetected because the approach identifies infected people who aren’t yet showing symptoms (presymptomatic) or who do not show symptoms (asymptomatic). (Both groups can spread the virus.) This information can be used by public health officials to reinforce physical distancing and other isolation practices such as targeted testing of individuals to restrict community spread of the disease.

Increasing international travel and globalization has led to rapid spread of infectious diseases. To combat this, global surveillance of infectious disease must be conducted in real time or near real time, and extend beyond simply monitoring the number of infected people to also include the ability to quickly recognize novel disease patterns. The low cost, speed and ability of wastewater surveillance to detect emerging pathogens before they become endemic enhances the ability to respond to disease outbreaks without delay, decreasing global illness and death.