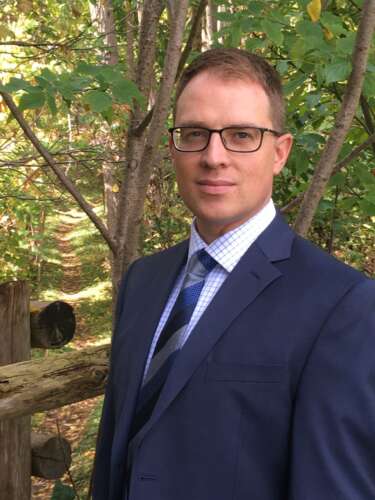 Brett Shepherd has been named director of the University of Guelph’s Ridgetown Campus. The two-time U of G graduate begins on Nov. 16.

The announcement was made today by Rene Van Acker, dean of the Ontario Agricultural College (OAC).

“Brett has the professional managerial skills that are required to lead the campus into a new era of innovation and growth,” said Van Acker. “He has demonstrated innovation and an ability to motivate people to create and drive new ideas and initiatives. Brett is also from the area and understands the importance of Ridgetown Campus to southwestern Ontario, as well as its impact on agriculture education and production throughout the province.”

As Ridgetown’s eleventh director, he will oversee critical, day-to-day business functions of the campus.

“Brett has the skill set and experience to advance the strategic vision, while also overseeing the robust operational and partnership requirements of the campus,” said Van Acker.

Most recently, Shepherd was director of operations for the Workplace Safety and Insurance Board’s (WSIB) southwest region. Earlier, he was director for intergovernmental affairs and strategic relationships and manager of strategic research at WSIB’s Toronto office.

He completed a B.A.Sc. at U of G in 2004 and an MA in leadership in 2014. Shepherd also holds certificates in change management and workplace mental health leadership.

“I am honoured to join the incredible team at the University and to become part of the Ridgetown Campus family,” said Shepherd. “The campus is a special place with a close-knit community that provides a critical education service to our province and the country. I look forward to helping the campus grow and build upon its solid foundation.”

Shepherd succeeds Ken McEwan, who became director in 2012. Following the completion of his term Nov. 15, 2020, McEwan will support new infrastructure initiatives on the Ridgetown Campus for the coming year before resuming his role as a college research professor.

“Ken has been a very dedicated director for Ridgetown Campus,” said Van Acker. “I want to take this opportunity to also thank him for his leadership and for his steering of the campus during a period of significant change. Ken has set the campus up well to capture new opportunities and growth.”

A virtual Q and A session with Shepherd, hosted by Van Acker and OAC, will be held Dec. 1 for Ridgetown and Guelph campus staff, faculty, students, alumni and stakeholders. To attend, contact Erin Levesque, administrative assistant, OAC dean’s office, at elevesqu@uoguelph.ca or 519-824-4120, Ext. 56211.