Raising slower-growing broiler chickens may improve the welfare of millions of birds, according to the largest and most comprehensive study of broiler chicken welfare worldwide by University of Guelph researchers.

The study, which has yet to be peer-reviewed, has been promoted externally by the Global Animal Partnership (GAP).

GAP provided a research grant to U of G in 2018 to study broiler welfare. The first of-its-kind study was funded by $1 million from GAP, the University’s Food from Thought project and the Ontario Ministry of Agriculture, Food and Rural Affairs.

The researchers are now preparing a series of peer-reviewed articles for publication.

“We found that, overall, many indicators of welfare are directly related to rate of growth,” said animal biosciences professor Tina Widowski, who led a team of experts in poultry welfare, nutrition, physiology and meat science at U of G.

The team says the study may eventually help poultry breeders and producers to select traits associated with better welfare.

The researchers studied more than 7,500 chickens raised at U of G’s Arkell Research Station. They looked at 16 genetic strains bred for four growth rates as well as other traits. Outfitting the birds with wearable devices like Fitbits, they compared mobility and activity. An obstacle test allowed the team to compare leg strength among different poultry strains. They monitored birds’ use of enrichment items and examined birds for foot lesions, and also looked at meat quality.

The researchers found that faster-growing chickens were less active and mobile, had poorer foot health and breast muscle damage.

“It was the combination of high breast yield and fast rate of growth that led to poorer welfare outcomes,” said Stephanie Torrey, an adjunct faculty member with the Department of Animal Biosciences.

The researchers said they were encouraged to find that some major health and welfare issues – including skeletal leg muscle problems and heart failure – that were common about 20 years ago no longer prevail.

“That means breeder selection to resolve those problems has worked, and we hope that results of our study will set the direction for the next phase of genetic changes leading to welfare improvements,” said Widowski, who holds the Egg Farmers of Canada Chair in Poultry Welfare. 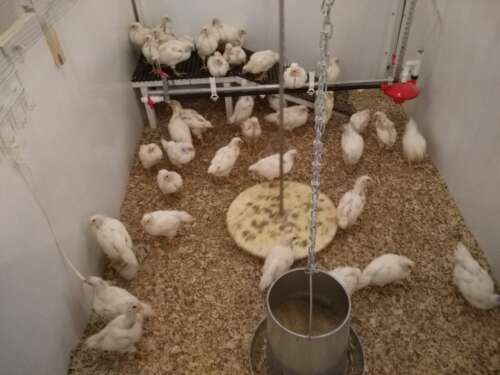 As consumer demand grows for chicken meat, producers raise billions of broilers worldwide, including more than 700 million birds produced each year in Canada.

Developed mostly through selective breeding, fast-growing birds reach market weight of about 2 kilograms in about 35 days.  Animal welfare concerns have led to development of slower-growing breeds that take at least a week longer to reach market weight.