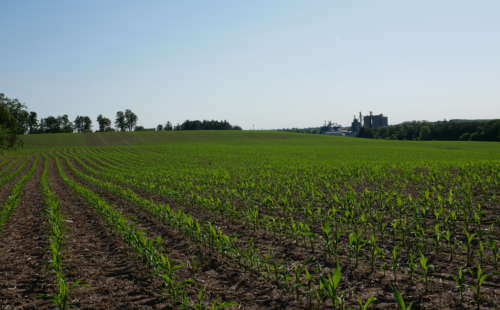 Cornfield on the fertile crop lands near Guelph.

By the year 2050, agriculture in southwestern Ontario will represent the gold standard for sustainable food systems.

That’s the vision of a University of Guelph project that has reached the semi-finals in the Rockefeller Foundation’s $2-million 2050 Food System Vision Prize.

The competition attracted more than 1,300 entries from around the world, with just 79 of those selected to be semi-finalists.

Ten finalists will be selected in August, each receiving $200,000 to continue their project intended to transform food systems.

The goal of the U of G entry is to make food production in agriculturally prosperous southwestern Ontario the best and most sustainable in the world.

The entry is supported by U of G’s Ontario Agricultural College and Arrell Food Institute, NGOs, agri-food experts and the Guelph-Wellington Our Food Future Initiative.

“COVID-19 has exposed the vulnerability of our food production system and it is clear that failure to change this will only increase the many food security issues that we face locally, nationally and internationally,” said René Sahba Shahmohamadloo, a PhD candidate in the School of Environmental Sciences and the project lead with supervisor Prof. Paul Sibley.

They aim to create a framework for a resilient agro-system that integrates economic, cultural and ecological components into the sustainable production of diverse foods.

“If implemented, we believe this vision shows great promise to become the gold standard for transformational change and could provide a framework that can be applied almost anywhere around the world,” he said.

The framework would be phased in over a number of years, beginning with actively engaging key stakeholders, including policy-makers, and initiating training programs and workshops in regenerative agriculture practices.

“Southwestern Ontario is one of the most intensive agricultural areas in Ontario and, indeed, in Canada,” Sibley said. “Many of the signals and trends indicating reduced sustainability, such as declining soil health and biodiversity, that we see elsewhere in the world, are present here as well. Change must happen and we hope that this vision, in concert with the growing work of many of our partners, will be the catalyst for that change.”

While modern agriculture has increased production, ecological, economic and cultural indicators show that continuing with a “business as usual” approach is not sustainable, Shahmohamadloo said.

Sustainable agriculture – a means of production that does not degrade the environment over time – will be imperative in feeding a population projected to reach 10 billion by 2050.

A science-driven philanthropic organization based in New York City, the Rockefeller Foundation promotes the well-being of humanity. It advances new frontiers of science, data, policy and innovation to solve global challenges related to health, food, power and economic mobility.

The organization launched the 2050 Food System Vision Prize to spark credible and inspiring visions for the global food system.

“We believe reaching the semi-finals is a big achievement for the University, and we’re excited for the doors this will open to propel our vision forward and help us build partnerships,” said Shahmohamadloo.

Among the potential benefits of implementing the framework would be improved human health, more diverse agricultural products, better use of farmland, cleaner water and greater appreciation of the environment.

“Our vision is a broader perspective on the overall health of the environment in food production systems – pollutant reduction and increased biodiversity, leading to greater ecosystem resilience in the face of climate change,” said Shahmohamadloo.