High-Profile Crime Reporters to Give Truscott Lecture in Justice 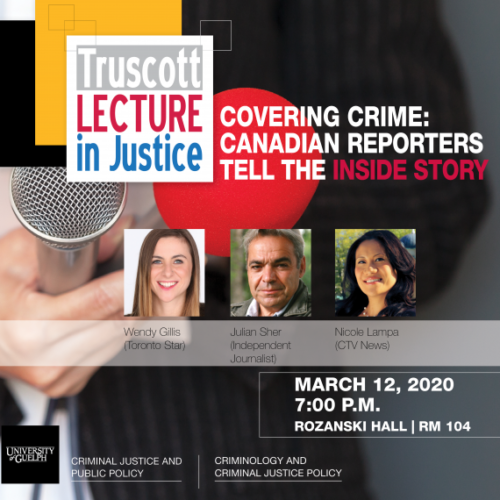 A panel of high-profile reporters will discuss their role in the criminal justice system for the University of Guelph’s 2020 Truscott Lecture in Justice, March 12.

Sponsored by the College of Social and Applied Human Sciences, the lecture will take place at 7 p.m. in Rozanski Hall and is free and open to the public.

Sher is a former Toronto Star investigative reporter. He has written six crime-based  books, including Until You Are Dead: Steven Truscott’s Long Ride into History. His other books are about human trafficking, internet child predators and global biker gangs.

Gillis is the crime reporter for the Toronto Star and has been nominated for several national newspaper awards.

Lampa covers crime and court stories for CTV News and has reported on many high-profile cases, including the Dellen Millard investigation.

As part of the Truscott Initiative launched at U of G in 2009, the lecture series was created to improve understanding of the nation’s complex criminal justice system, and to highlight how criminal justice intersects with other policy areas and broader conceptions of justice.

The initiative was named for Guelph resident Steven Truscott and his family. Truscott is known across Canada for his decades-long battle to prove his innocence after the 1959 murder of his schoolmate Lynne Harper.

Wrongfully convicted of the crime at age 14, he spent years in prison before his release in 1969. He was acquitted by the Ontario Court of Appeal in 2007.