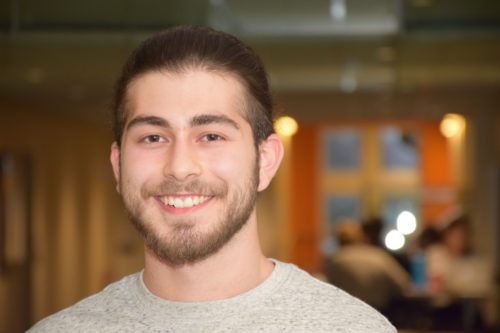 Just as Bartu Suer enters his final semester in the University of Guelph’s marketing management program, his music career back home in Turkey is taking off.

Suer is the lead singer of çatıkatı, a high-energy, alternative rock band that started in Istanbul and continued to evolve – mostly through rehearsals and songwriting binges in a small Guelph apartment.

Another member of the band, guitarist-vocalist Can Ozyurt, is also an international student from Turkey. He studies mechanical engineering at U of G. Keyboard player Ural Turan attends university in England.

Things started heating up for çatıkatı after it won a talent contest for new bands a few years ago. That big win is starting to pay off.

“I’ve been singing since I was five years old and playing the guitar for about five years,” said Suer, who is somewhat stunned that the band’s song merhaba has hit airwaves and screens, first in Turkey, then around the world. The music is being distributed by Sony Music Turkey.

The professional video for the song, whose title means “hello” in English, grabbed more than 2,000 views on YouTube in its first two days on the video sharing site. The song was streamed more than 30,000 times on Spotify in its first week of availability, a steady demand that bodes well for the band’s plan to cut an album. 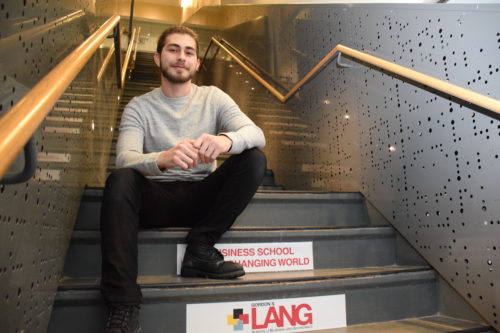 Sung in the Turkish language, merhaba is a song about being real with each other, not two-faced. The theme of the planned album is that there are many things in the world that we may not like but over which we have no control.

Everything Suer has learned in the Gordon S. Lang School of Business and Economics marketing management program has helped in his music career – whether it’s the insights gained into contract negotiations or the strong communication skills.

The band signed a recording contract with Turkish record label Lucky Ones, a company that has a distribution contract with Sony Music Turkey.

Asked if he was always a naturally gifted vocalist, Suer quickly answered in the contrary: “No. I was a really bad singer when I was little. I listen to the recording I did when I was 10 or 12 and I cringe.”

That is not the case today. His confidence has grown both as a singer and a performer, although he’s reluctant to admit it.

“Through time and with some lessons and persistence, I guess I got to a point where I was comfortable singing to other people,” he said, adding that acting as a teenager also boosted his confidence.

Suer, who learned English at a young age, didn’t know there was such a place as Guelph until he began searching for a top international university to attend. Initially, he dreamed of studying in the U.S. and fulfilling a fantasy about living in a glamorous American city.

“But as I got older, I realized it wasn’t all about the smoke and mirrors,” he said. “I saw that there were disadvantages in living in such big, expensive places in the world. My attention shifted to Canada, and Guelph came to my attention. I was impressed with U of G’s rankings. But more than that, I came from Istanbul, this huge metropolitan centre. Compared to that, Guelph was such a different and intriguing possibility.”

The singer-songwriter likes to tell stories in his songs.

“I guess because it’s hard for me to talk about stuff otherwise. It comes more naturally to me to sing about them, rather than talk about them in person.”

The idea of forming a band and considering a career in music was a far-off dream, Suer said, especially with the band members so far from home and not living in the same area. It looked impossible until a certain contest happened.

“A few years ago, there was a competition in Turkey for non-professional bands that wrote original songs,” Suer said. “We entered with a song called Sitcom Girl and we ended up winning.”

The song was written in Guelph. The prize was a professionally produced video and recording time for the winning song.

The win could have been a one-off moment of success, but the band members saw an opportunity to make connections with music industry insiders, Suer said. Eventually the record label Lucky Ones heard their music and produced the current single. They may go on to produce an album.

The music industry is a highly uncertain one, Suer said, and çatıkatı is an unknown entity in Turkey’s music scene. The band doesn’t have a massive public relations machine behind it. Still, Suer hopes a music career will happen.

“I believe in the abilities of me and my bandmates,” he said. “I guess it’s a matter of luck and timing at this point. But I’m super excited.”