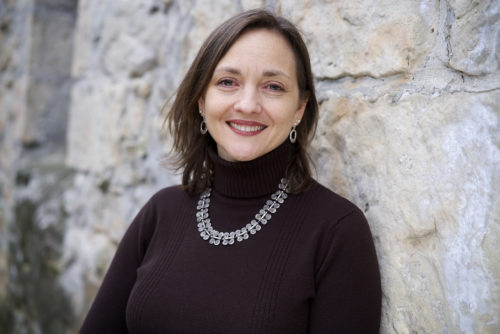 A new director has been appointed to the University of Guelph Arboretum.

Justine Richardson, an experienced manager focused on facilitating interdisciplinary research and community engagement, will step into the position effective February 3.

The Arboretum is the largest and most comprehensive of its kind in Ontario. It is home to more than 40,000 specimens in more than 30 plant collections and conservation gene banks, as well as gardens, wetlands, nature trails and forests.

“Justine’s unique set of experiences and skills makes her a terrific fit for this leadership role on our campus and in our community,” said Prof. Rene Van Acker, dean of the Ontario Agricultural College, the administrative home of the Arboretum.

“She is an experienced manager, expert organizer and champion of interdisciplinary research, a nature enthusiast and a skilled storyteller.”

Richardson has been the project manager for the International Institute for Critical Studies in Improvisation at the University of Guelph since 2015. In this role she supported a large team of researchers, community partners, staff, students, and volunteers to produce innovative research, communications and partnerships.

Richardson holds a BA from Yale University and an MA from Michigan State University. She has worked in project management roles in academic institutions since 2000.  She is also an award-winning director, videographer, cinematographer and editor.

Each year more than 100,000 people visit the Arboretum, and more than 6,000 people participate in workshops, guided tours and special events. The Arboretum will celebrate the 50th anniversary of its founding this year.

“It is both a natural and cultural place, one where people come together, where the architecture, collections, and grounds are designed by people working with and learning from nature,” said Richardson. “This opportunity brings together my interests in cultural spaces, my passion for the natural world and my professional skillset.”

Richardson will work with Arboretum staff and volunteers to develop strategic plans for the teaching and research mandate of the Arboretum. One of her key mandates is operational planning to support the Arboretum and its important role as a place for student and community learning and wellness. Her position is also responsible for overseeing the budget and creating new revenue streams.

“I am looking forward to meeting with the variety of Arboretum stakeholders to hear why nature and the Arboretum are important places to them, and how we can work together to promote and support its future,” she said.

“I believe the Arboretum has an important role to play in addressing many challenging issues of our time, such as climate change, Truth and Reconciliation, and mental health and wellness. And I am looking forward to listening and learning, and working with staff, administration, faculty and stakeholders to hear their visions and hone one together.”

Prof. Shelley Hunt, of the School of Environmental Sciences, recently stepped down from the director role after a very successful six years. She served as director from 2013-2019.

“Shelley was a terrific leader for the Arboretum,” said van Acker. “We are sad to say goodbye but are also very thankful for the significant contributions she gave.”

Van Acker pointed to Hunt’s efforts to reconnect community supporters and donors to the Arboretum, to elevate the Arboretum as a significant research site for faculty, and to ensure the Arboretum maintained its accredited status. Hunt also facilitated vital infrastructure upgrades and renovations for the Arboretum and Hilton centres.

“The Arboretum is a special place, and it has been an honour to serve as part of the ‘Arb’ team,” said Hunt. “I am proud of what this team has accomplished over the past several years, and I’m excited for the future of the Arboretum as it celebrates its 50th anniversary and continues on its journey of excellence in plant collection development, nature education, plant conservation, and supporting teaching, research and outreach at the University of Guelph.”

More information can be found on the Arboretum website.