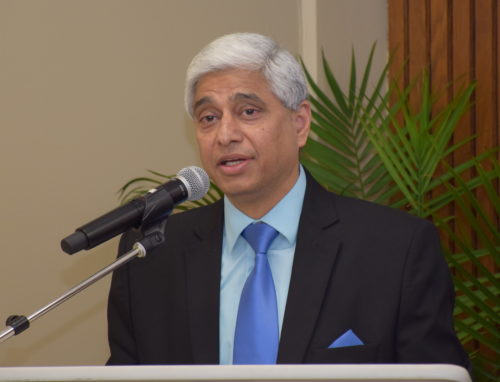 What would Mahatma Gandhi have said about social media and fake news?

“Gandhi and the Quest for Truth” will be the topic of a public lecture this month at the University of Guelph by Vikas Swarup, High Commissioner of India to Canada. In 2005, Swarup published Q&A, a novel adapted in 2008 as the multiple Oscar-winning film Slumdog Millionaire.

He will speak at the Arboretum Centre Oct. 8, 6 p.m. The lecture is free and open to the public.

An Indian writer and career diplomat, Swarup joined the Indian Foreign Service in 1986. This fall, he will return to Delhi as Secretary for Consular, Passport, Visa and Overseas Indian Affairs.

During a visit to U of G in fall 2018, Swarup discussed “Why India Matters.”

As part of events this year marking the 150th anniversary of Gandhi’s birth, he will discuss the relevance of Gandhi in the 21st century.

She said his life and work are reflected in her own research projects in India on young people’s prospects in farming, and gender discrimination and inequality. As Canada Research Chair in Gender, Justice and Development, she studies how to revitalize rural areas and alleviate unemployment and poverty.

“Villages were at the heart of development for Gandhi,” said Srinivasan. She grew up in India, where reminders of Gandhi were everywhere, from village statues to his likeness on the country’s currency.

For last month’s Hopper Lecture on campus, Indian historian and writer Ramachandra Guha spoke on “Gandhi, Environmentalism and the World Today” as part of the World in 2030 event series.